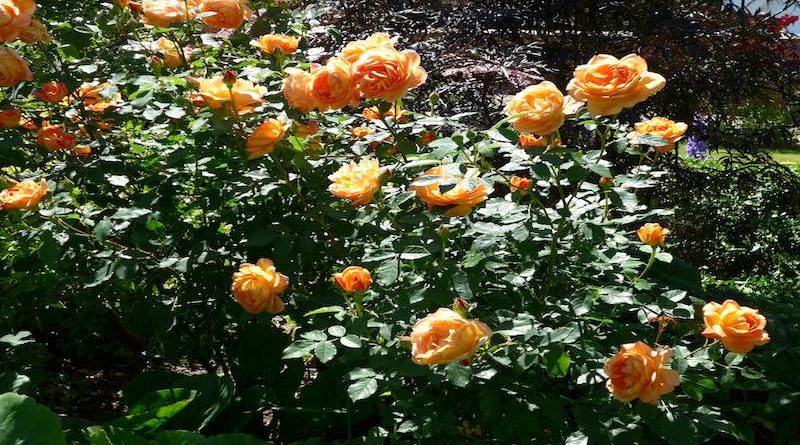 Little did Ann Bird think that buying half a dozen rose bushes from Tesco for her new garden when she married many years ago would lead to a lifetime passion and important role in the rose world. Her fascinating talk to Ticknall Garden Club at their May meeting told the amazing story of how she became interested in growing roses and began to exhibit them with great success and eventually was appointed to judge them at shows.

Ann rose through the ranks to become the first woman President of the Royal National Rose Society at a time when it was struggling to survive. Despite the rose invariably being voted the nation’s favourite flower, the vogue for whole beds of roses has almost vanished as they are now more likely to be included in mixed border planting.

Not only did Ann keep the Rose Society going but also she oversaw the establishment of a brand new rose garden at St. Albans after the society’s house there was sold to raise funds. Ten thousand roses, with Great Expectations and Simply the Best as pride of place, were planted with lavender underplanting. From the cellar of the old house she rescued thousands of slides charting the heyday of rose growing from the 1930s to 1960s. She used some to illustrate her talk.

Ann Bird travels the world representing the Great Britain Rose Federation. Roses in Japan are the best in the world she maintains, as thanks to the polluted atmosphere they never get blackspot! A public rose garden will cover many acres but the private garden can only find room for roses in pots as most people live in high-rise flats with only a balcony for growing space. Clay pots are items to be prized and Wychbold clay pots fetch a premium there. She has planted roses in Bermuda which to her dismay had only eight inches of soil. She also helped to reinstate the rose beds at Alcatraz.

Some of her favourite roses include Silver jubilee as a good exhibition rose, Compassion a fragrant climber and Just Joey, still going strong. She loves old garden varieties like Fantin-Latour with Rosa Mundi being her absolute favourite.

She recommended pruning down to 12 inches and keeping an open bush. Always feed generously with manure. Not for nothing is she known as the Rose Queen of Market Harborough as seven tons of manure are delivered to her garden every year!