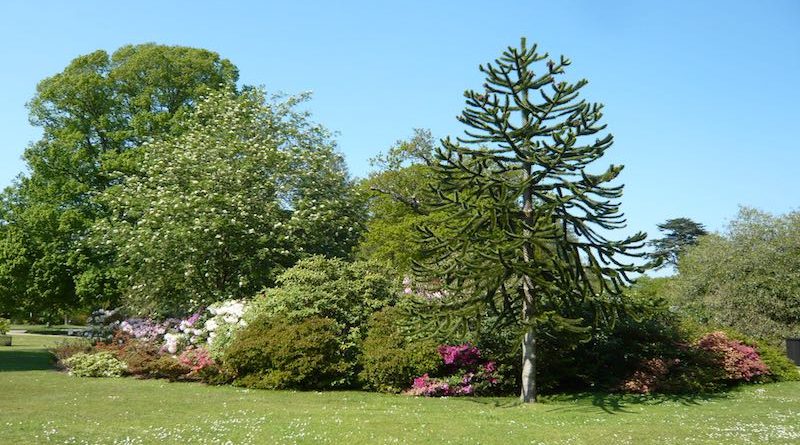 The suburbs often get a bad press being neither as vibrant as a city or as attractive as the country. Perhaps an in-between place; boring and sterile. Yet some of our most lovely gardens are to be found on the outskirts of a town with attractive and well-kept front gardens and lovingly tended areas at the back of the house.

However the suburban garden under scrutiny at the June meeting of Ticknall Garden Club was hard to beat and certainly not a typical one.

When Mike Davey took over his very large garden on the outskirts of Ruddington he found a long established but uncared for piece of land. His advice in such circumstances was “be ruthless” Don’t be afraid to remove, cut down and move things around. He spent ten years burning debris from just this activity.

Now his garden has a sweeping lawn area with beds of perennials. In his large wildlife garden area he can count eighteen species of bird. He leaves seeds for the birds on teasel, angelica and spruce.

He has created a shady woodland area where jeffersonia take pride of place along with epimedium, brunnera and primroses.

Spring beds are alive with snowdrops, dwarf narcissi, tulips and crocuses protected with chicken mesh against his constant foe, the squirrel. Feature trees include hazel contorta and Garrya elliptica and cornus kousa. He trains clematis to clamber through the larger trees. One priority was to create a pond for wildlife. It is now well established and attracts frogs, newts and dragonflies amongst the flag irises, marsh marigolds, skunk cabbage and rodgersia which is immune to slugs. His assorted collection of greenhouses contain hundreds of propagated plants as befits a man who is a plant scientist at Nottingham University.

All in all, not a typical suburban garden but we can all aspire to emulate at least some of it. Whether it means having a well stocked border, a wildlife area, a garden pond or even a small patio area ablaze with colourful pots and hanging baskets.

Mike Davey has dedicated his whole life to plants as his work and leisure. In doing so has raised many thousands of pounds for the Action for Children charity.