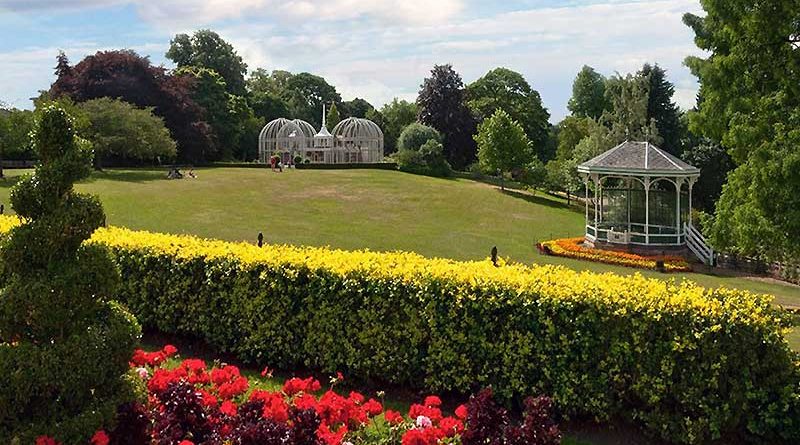 At the June meeting of Ticknall Garden Club Philip Aubury gave an interesting talk on what he called “an oasis of delight”. This was in fact the Botanical Gardens at Edgbaston in Birmingham. Being a past director he knew a lot about its history. A Horticultural Society was founded in Birmingham as far back as 1829.

This was at a time when plant hunting in foreign lands was bringing in many new discoveries to supplement the limited range of native species.

The new society leased land from the Calthorpe Estate at Edgbaston and in 1832 a Botanical Garden was opened. In 1835 a large exhibition hall was built which housed spectacular floral displays and also hosted grand functions. With the addition of zoological exhibits Birmingham Botanical Gardens became a popular place to visit and it attracted lots of visitors for many years.

With the advent of the car its popularity waned as people travelled further afield for their leisure pursuits. Philip Aubury had the arduous task of implementing changes in the 1980s to change round the garden’s fortunes. Over a period of 20 years £5 million pounds was spent carrying out a makeover and the Botanical Garden is once again a major attraction.

The speaker took his audience on a photographic guided tour of the extensive grounds. He started at the Tropical House built in 1854, housing bananas and pineapples. Then on to the sub-tropical Palm House built in 1871 where tea plants, ferns and orchids grew in reduced humidity. The Terrace Glasshouse with a Mediterranean climate had citrus, olives and pomegranates growing in it. The Arid House was home for cacti and living stones. The Terrace has a grand view over the lawns and flower beds to the bandstand and aviary. It was here that Bill Clinton, when attending the G8 Summit, kept his guests waiting while he took a walk to admire the garden. With the additional features of alpine house, rock garden, sensory garden, historic garden and playground there is truly something for everyone.

Now retired, the Speaker was justly proud of his achievements and had proved that Birmingham Botanical Gardens really are an oasis of delight.

The next meeting of Ticknall Garden Club will be on Tuesday July 11th at 7.30 pm in Ticknall Village Hall. Dr. Ken Thompson is a world-renowned plant and animal ecologist who will be talking about Gardening for Pollinators. He comes highly recommended.
Admission £5 for Garden Club members and £8 for visitors.