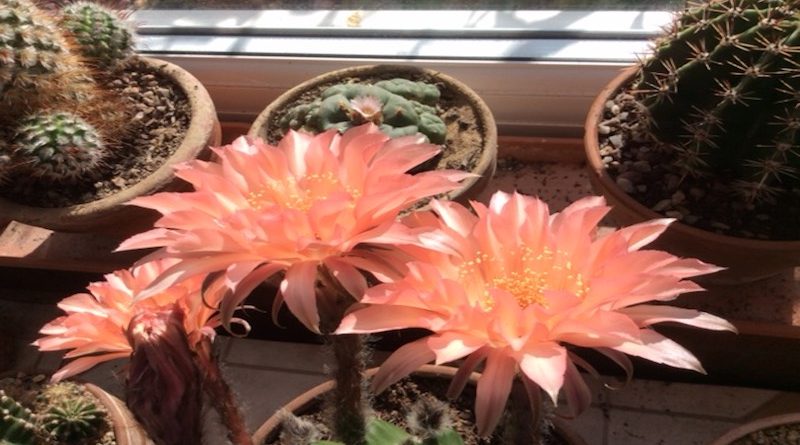 There was no doubting the subject of Ticknall Garden Club’s talk on November 14th when Stan Griffin and Vicky Newman arrived both resplendent in matching waistcoats and jackets covered in cacti.

After a life long interest in cacti they gave up their day jobs and took over Craig House Cacti in West Bromwich in 2007. Since then they have gone from strength to strength and become renowned gold medal winners on the show circuit.

Their talk did not dwell on the care of cacti but documented their first two years in business when they travelled the length and breadth of the country developing their expertise and establishing themselves as formidable competitors in the show world.

Their first show in Cardiff proved to be a long lasting favourite venue and they found time to appreciate and take photographs of the many attractions of the lovely city. They had arrived in a caravan pulling a large van jam packed with pots of cacti in all shapes and sizes. Their first two years would prove to be a never ending round of packing and unpacking their precious cacti and perfecting the skill of displaying them in the oddly assorted display areas offered to them along with the minimum of storage space. Despite unwelcome criticism from judges on mismatched pots, wrong coloured backcloths and plants perched at odd angles they soon began winning awards.

However winning gold at Chelsea is always regarded as the jewel in the crown. So far they have won eight of them. (But winners only get the first one made of gold as the rest are replicas!) Now Stan and Vicky are such fixtures at Chelsea they are greeted by all the celebrities who visit, the Queen included, and are regulars on the TV screen.
Their photographs vividly demonstrated the pains and perils of preparing for shows – lugging round heavy pots (with spikes attached) scrambling over unsteady display stands and vans stuck in mud. Bakewell and Dundee were memorable places for never ending rain.

Not surprisingly all this hard work has taken its toll and they now intend winding down from their hectic schedule and be more selective as to where they exhibit in future.

As to caring for your own cacti: plant in a half and half mixture of your favourite compost and grit, water freely in summer and feed every three weeks with a proprietary feed and then keep dry in Winter.