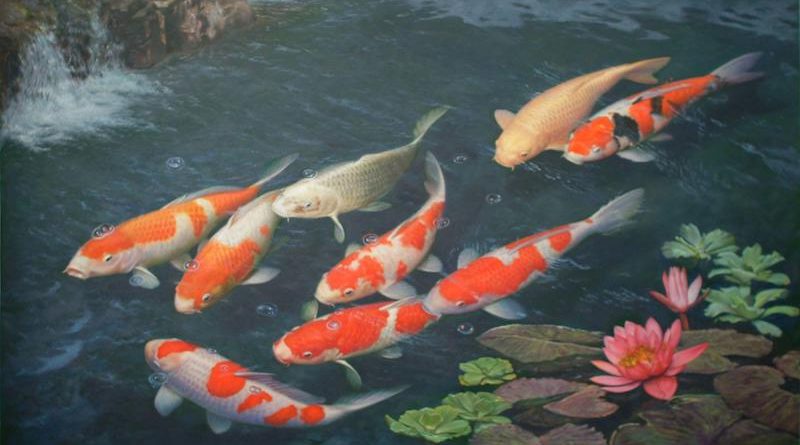 Patsy Rayner‘s son went to Japan while a student nineteen years ago and this led to him making his home there. As a consequence Patsy is now very familiar with the Japanese way of life. She has made a study of Japanese gardens and Ticknall Garden Club were treated to the results of this in a fascinating talk at their July meeting.

A garden in Japan is regarded as a place for contemplation and meditation where order and harmony are the guiding principles. This is linked to the religious beliefs of Zen Buddhism and Shintoism which involve the worship of nature with its continuing cycle of seed and harvest and life and death.

Japan is a small narrow island with a range of mountains down its spine. Cities are crowded and hectic but away from these the scenery is dramatic and beautiful with mountains, rocks, rivers and waterfalls. Gardens need to reflect this landscape so they are designed with these elements in mind.

A main component is always water in some form or other and if koi carp can be included so much the better as they are a symbol of good fortune. The placing of rocks, stones and gravel represent an unchanging and solid existence in contrast to the changing nature of trees and plants which grow, blossom and lose their leaves. The Japanese devotion to the cherry, chrysanthemum (the national flower), wisteria and acer is well known. The reemergence of blossom in Spring is regarded as the rebirth of the soul. The transience yet timelessness of nature is expressed in the saying “the pine tree lives a thousand years, the morning glory but a day”.

Patsy reviewed the development of Japanese garden design from the sixth century to the present day. Beginning with palace courtyards and temple gardens then paradise gardens and pond gardens to landscape gardens and the stroll gardens of later centuries which showed off wealth. The opening up to the west after 1867 led to the creation of public parks and small private gardens. The ritual of the tea ceremony also became a feature.

Whatever the wide variety of designs over many centuries, they all retained the same symbolic elements reflecting the reverence for the natural features of the Japanese landscape. Now copied throughout the world they always offer an oasis of calm for quiet contemplation.