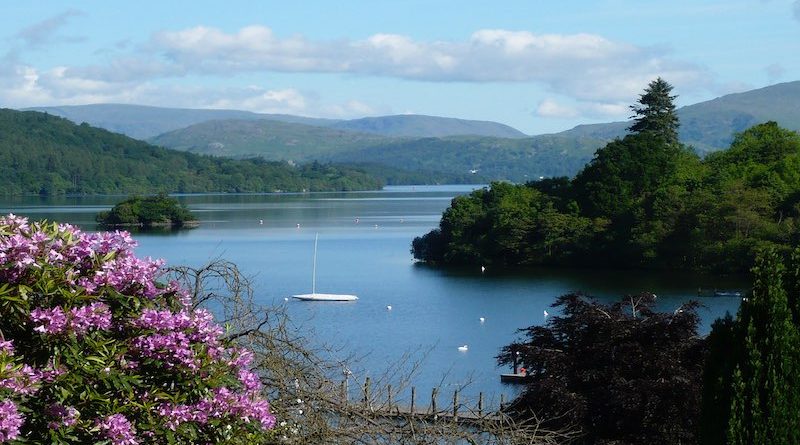 When Don Witton went on his honeymoon to the Lake District many years ago, he was smitten forever by the overwhelming grandeur of the scenery which, as Sheffield born and bred, he had never before experienced. A lifelong love of iconic views together with his passion for walking and gardening all combined to produce his impressive talk called Once Seen Never Forgotten given to Ticknall Garden Club at their October meeting. His lifetime interests have meant many years of foreign travel, nurturing a national collection of euphorbias and walking all 214 Wainwrights.

His photographs of outstanding views abroad included Table Mountain in South Africa, Grand Canyon and Monument Valley, U.S.A, Ayers Rock and the Great Barrier Reef in Australia and Las Vegas. His Visionary Views featured gardens closer to home in their natural settings. Bodnant with towering Snowdonia in the background, Holehird with its range of Pikes, Powis Castle with its majestic terraces, Parcevall Hall in Wharfedale and the humble view of his euphorbias on his allotment with his neighbour’s ramshackle aviary in the background. Wild flowers too were shown in their natural habitats. Wild lupins in New Zealand, gentians in the Alps and orchids on the Monsal Trail.

A Glorious Gardens section was full of fabulous pictures of some well-loved places.  RHS Hyde Hall, Rosemoor and Wisley and Harlow Carr always impress. As does the Victorian parterre bedding at unspoilt Stourhead unchanged in 200 years. Bodnant with its unforgettable laburnum avenue, crimson acers in Westonbirt Arboretum, gleaming white silver birches at Anglesey Abbey and acres of stunning bedding at Breezy Knees in Yorkshire were some of his favourites.

Oxford Botanical Gardens has another collection of euphorbias but not shown to advantage, in his view, in rigid rectangular beds. His own take pride of place in island beds amongst other plants. Nor were individual plants forgotten as he extolled the virtues of colourful crocosmia, Harlequin and Severn Sunrise, the striking iris siberica, Silver Edge and Melton Red Flare and day lilies Black Eyed Susan and Sammy Russell. A red and white dahlia was aptly named York and Lancaster.

Name Nonsense concentrated on the unusual pronunciation and naming of some plants. The well-loved Michaelmas daisy has undergone a bewildering name change for the aster novae-angliae group to symphyotrichum. Another mouthful to pronounce is Paeonia mlokosewitschii, understandably nicknamed Molly the witch. However, primula Strong Beer, Corydalis Tory M.P. and hemerocallis Little Bugger raised a laugh with the audience.