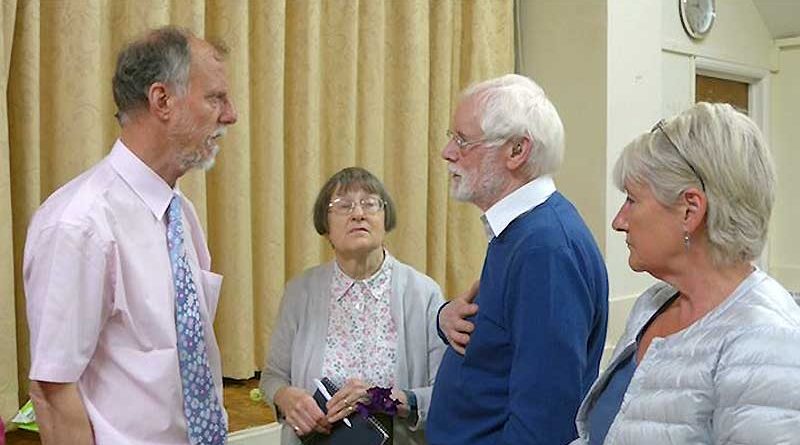 Jeff Bates, a well-known local horticulturalist, is always a crowd-pleaser and when he came to talk to Ticknall Garden Club in July it was no exception.

He came in carrying a couple of carrier bags containing a motley collection of cuttings. Time after time he dived into the bags bringing out the inspiration for all things relevant at this time of the year. Advice on pruning shrubs that have flowered such as weigela, pyracantha, roses and wisteria was given. Always prune from the first year of growth and he was also a great advocate of pinching out shoots on all shrubs and trees frequently to maintain bushy growth.

It was the right time of year to take cuttings of penstemon and osteospermum, as plants might not survive the winter. Put them in a mixture of half compost and half vermiculite in cell trays and they will romp away. Split your bearded irises now too.

It had been a great year for slugs and snails, leaf miners, caterpillars, sawfly, lily beetle and black spot as his collection of ragged leaves testified. Fortunately most plants would survive the onslaughts with no long-term damage. Soft soap solution could be tried and even Provado Bug Killer if really desperate.

Apple thinning should be done now. Cut down to two if eaters and one for cookers. The same applied to pears and to prevent branches breaking plums might need thinning too. Prune cherries and plums after picking. Leeks and cabbage plants can go in the ground now. Pinch out the side shoots of tomato plants and limit to six trusses.

The wet summer meant that hedges had needed more frequent cutting. Little and often was in the long run less trouble he thought. The same applied to mowing the lawn on a high setting. Leave the clippings to feed the grass.

Relax a little with bulb catalogues and choose your daffodils which ideally should be planted in August. Moving bulbs should also be done now.

Jeff Bates had given much appreciated and wide-ranging seasonal advice resulting from his many years spent in the horticultural world.