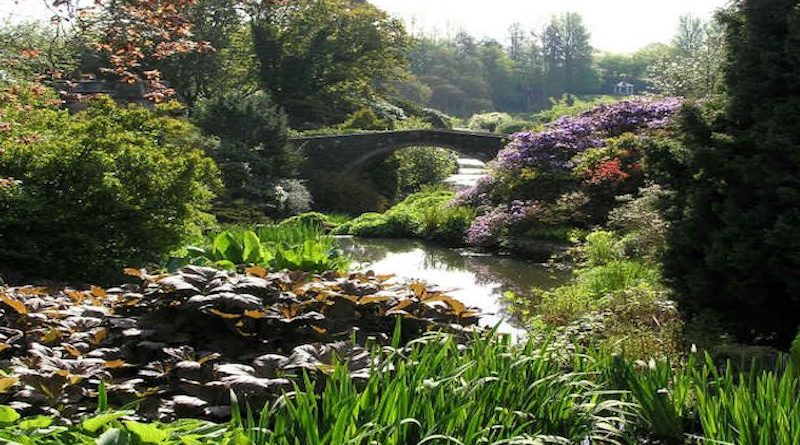 Jeff Bates made a welcome return to Ticknall Garden Club for their April meeting. He gave a guided tour of seven of his favourite English gardens. He illustrated his choice with his own stunning photographs taken on location.

He started the journey at Consall Hall, Podmore, a little known underrated gem near Stole on Trent. It has been created over the last fifty years from redundant pit banks by William Podmore. Its seventy acres includes six lakes, various follies, summerhouses and even a packhorse bridge. Its various vantage points are designed to admire eye-catching vistas. A fantasy in the romantic style, it is an eighteenth century garden created in the twentieth century.

He then moved on to Hampton Court Castle in Herefordshire which, despite an ancient setting with a traditional ha-ha, has a modern garden. Geometric lines abound. Hedges of box, a rectangular pool and rows of agapanthus in pots are examples. The perennial border has strictly themed colour planting.

Cholmondeley Castle Garden in Malpas, Cheshire is a romantic fantasy of the nineteenth century with its Gothic Castle as a backdrop. An ever-changing plantsman’s garden creates a picturesque scene with follies and terraced glades surrounding a large lake.

Next stop was the truly unique Sezincote Garden near Moreton in March. The house was an inspiration for the Brighton Pavilion being in the Persian style and evoking the Moghul Paradise Gardens. The theme is reinforced with a temple to Surya the sun god, the Indian bridge adorned with Brahmin bulls and a temple pool of still water for quiet contemplation.

Knightshayes Court at Tiverton has fine woodland and formal gardens but is memorable for its recently restored large Victorian walled kitchen garden.

Sudeley Castle at Winchcombe has a romantic feel with its Castle ruins. The centrepiece is the Queens Garden so named because four English queens; Anne Boleyn, Katherine Parr, Lady Jane Grey and Elizabeth I walked in the the Tudor gardens there. Katherine Parr is buried in the chapel.

Jeff Bates’ final stop was at the finest eighteenth century English garden of them all.  Stourhead in Wiltshire was the earliest example of a garden not attached to the house itself. It was designed to be an immersive experience where planned vistas would incorporate features such as lakes, follies, statues and grottos. This vision of a classical landscape influenced garden design for many years to come.

In his armchair tour Jeff Bates had reinforced the view that we are lucky to have so many truly magnificent gardens in England.