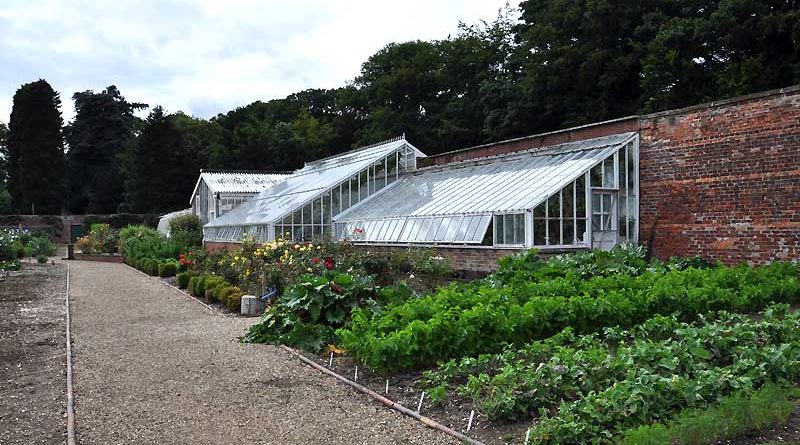 When Stephen Desmond came to Ticknall Garden Club in September to give a talk with the title The Kitchen Garden it was probable that most of the audience was expecting to hear lots of advice on growing vegetables. They were in for quite a surprise as instead, he took listeners back in time to the seventeenth century.

He extolled the virtues of a visit to the Potager de Roi at the Palace of Versailles as being an excellent example of a traditional walled kitchen garden. It was established by the famous French gardener Jean-Baptist la Quintinie to satisfy Louis XIV’s desire for a constant supply of fresh vegetables and exotic fruits to satisfy his huge appetite.

The garden consisted of four rectangular plots in a grid layout with pathways and surrounded by a high brick wall. It had a dipping pond in the centre to make the watering of plants easily accessible from all sides. A hothouse on one edge supplied fruit that needed heat to ripen. A brick wall creates an ideal microclimate as it absorbs heat in the daytime and releases it slowly at night.

This basic design became the template for kitchen gardens attached to large country houses for future years to come. Their heyday came in Victorian times when every stately home had a walled kitchen garden to supply the needs of the residents, staff and guests. Many staff were employed and there was a lengthy training period if the aim was to achieve the managerial role of head gardener.

Percy Thrower followed the typical progression. After leaving school he became a gardener’s boy and at eighteen he became a journeyman and learnt the trade at different gardens for six years. He was promoted to foreman at Derby Parks department. Finally, he was appointed Head Gardener at various establishments before settling as Parks Superintendent at Shrewsbury.

Unmarried journeymen lived together in a bothy which could be in various states of repair. A head gardener might live in a house which overlooked the garden to keep his eye on the workers in the garden. His status would be high and equal that of butler and estate bailiff.

After the Second World War, most walled kitchen gardens attached to stately homes fell into decline. They were expensive to upkeep and the need to sustain a large household had dwindled. In recent years some have been restored. West Dean, Clumber Park, Knightshayes Court and Beningbrough Hall are all good examples to visit. This is leading to a welcome revival and interest in horticulture as a profession and there is more demand for the skills of a head gardener once more.

Our own local Calke Abbey has had limited restoration and a visit there gives a flavour of how things used to be. However, the original, huge kitchen garden walled area which contains the renovated orangery remains still laid down to grass.

Stephen Desmond turned out to be a knowledgeable speaker who gave a fascinating if unexpected lesson in garden history.