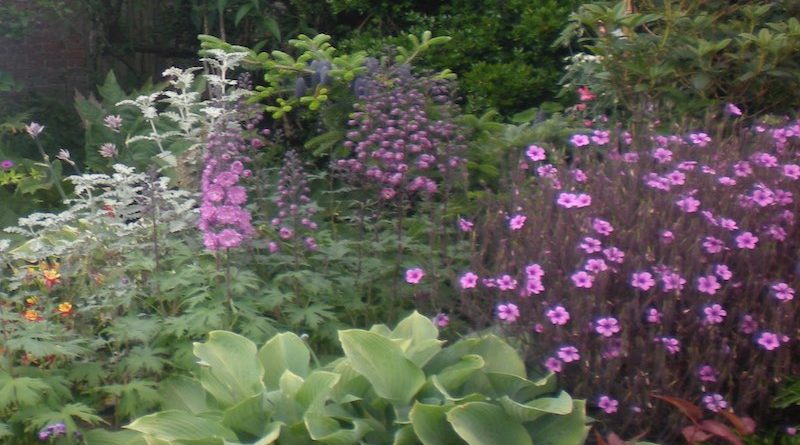 The last two talks at Ticknall Garden Club in May and June have featured two dedicated gardeners who have been very successful in their careers. They can transmit their enthusiasm for their love of plants so well that listeners are persuaded to buy plants that they never thought they needed!

They both established their garden businesses twenty-five years ago. Bob Brown set up Cotswold Garden Flowers near Evesham and Justin Harrison started growing plants to sell on Burton Market. They concentrated mainly on perennials; those that were popular and reliable but also any interesting new varieties that showed promise. Both preferred to concentrate on growing their own plants rather than relying on mass production from outside sources. Neither was keen to cash in on current fashion. Over the years they have inevitably gained considerable expertise in their field and obviously have pleasure in sharing their knowledge with others. Justin is understandably full of praise for all his plants (he sells them on his market stall after all) but he has favourites. Sun-loving salvias are fragrant and a magnet for bees. He displayed new varieties called Bordeaux and Peaches and Cream. They should be cut down in Spring above an emerging shoot. For Bob, it was the polemonium, better known as Jacob’s ladder. Not the common self-seeding variety but a hybrid called Lathkill Dale which has no fertile seeds and is deliciously scented.

Both speakers express forthright views. Bob Brown debunks the myth that agapanthus like to be crowded to flower well. They need feeding and planting in the ground instead of pots. Manure shouldn’t be dug in the soil where it can’t be broken down easily but left on top of the soil for worms to do the job. Justin insists that any border should be planted with one-third conifers. A dose of bonemeal will work wonders on ailing plants. He believes that gardeners should be more adventurous in their pruning. A camellia, rhododendron or rose can be cut to the ground and will repay with healthy new growth. In addition, Bob Brown has achieved quite a name in the gardening world. He can be credited with the present popularity of heucheras by introducing them from America. He has spent many years breeding pulmonarias; better known as lungworts.  Diana Clare, named after his wife, has silver foliage edged with green and intense blue flowers. It still remains one of the most attractive varieties available.

They were two gardeners with so much in common who conveyed their enthusiasm and expertise with energy and humour. No surprise that the sale of the plants that they brought to the meetings did a brisk trade!