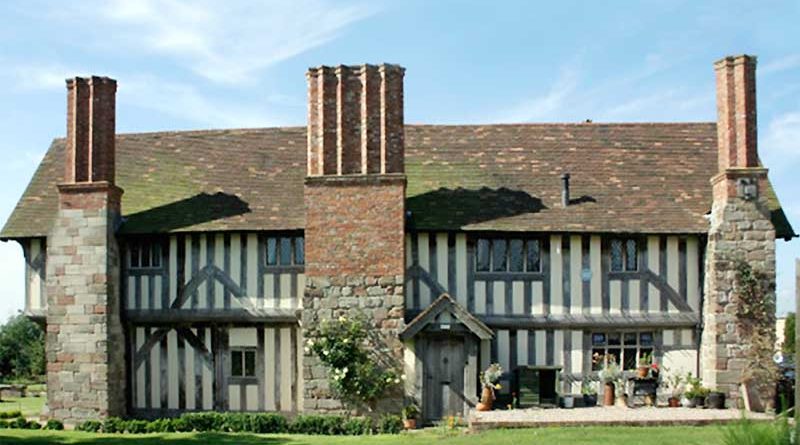 On the 5th August 2017, a group of TARG members was given a guided tour of Sinai House by the owner Kate Newton. The house, located at Shobnall on the outskirts of Burton, is a Grade II* listed building. It has a long and interesting history, but was derelict when the current owners acquired it in the 1990s.

A house and park at Shobnall was held by Burton Abbey in the Medieval period. The house was used by monks when having their blood let, a practice thought to promote good health. In 1410 it was called ‘Seyne’, a French word meaning blood, which may explain the origin of the modern name. Some stone walling in the cellar seems to have belonged to a building of the 13th or early 14th century and the present house is surrounded by a moat which is probably of 13th century origin.

The current house appears to be a large timber-framed Tudor building, consisting of a central range and two wings. However, this belies the true history of the building. The earliest part of the house is the north wing, which may date back to the 15th century, with the south wing being of a rather later date. It seems that the monks of Burton Abbey erected these two separate buildings on the site. The north wing has been restored by the current owners, with the help of English Heritage.

During our visit we were allowed to explored this part of the house, looking at the many interesting features, including a dragon beam in the sitting room and Medieval paintings of birds and foliage on the plaster walls.

Following the Dissolution of the Monasteries in the 1530s, Sinai House was acquired by the Paget family, who owned it until the early 1900s. The central hall range that links the north and south wings was built in 1606; and the Tudor-style chimneys were added in the 1700s.

The house was divided into six cottages in the late 19th century, and when eventually condemned as unfit for human habitation, it was used to shelter livestock.

The current owners have dedicated themselves to the enormous task of restoring the derelict building. Kate spoke of the complexities of dealing with the various authorities, raising funds and of finding craftsmen with the required skills.

We rounded off our visit with tea and scones in the dining room of the restored wing.

There are ghost walks, as Sinai is reputedly haunted.