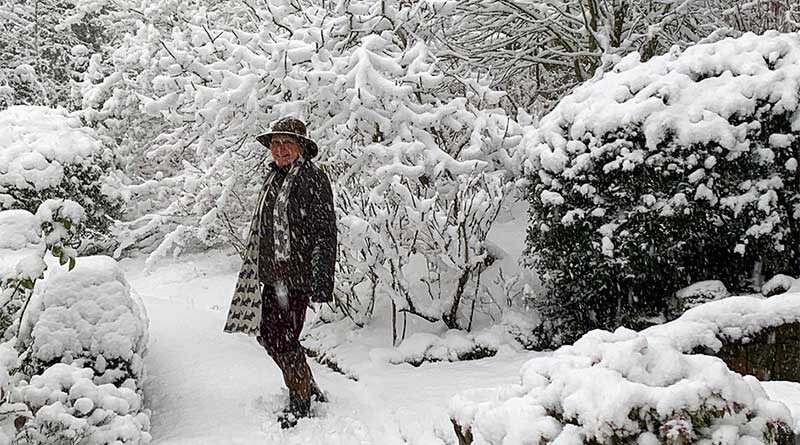 Do you remember last January (2021)?  We had deep snow here in Melbourne and probably Ticknall too, so there was little gardening possible other than to brush the weight of snow off evergreens such as box.  This January (2022), at least for the first few days whilst I write this, we have had rainbows and weather in which one can garden without a coat (with only the occasional recourse to a rain hat).

Neither of these two Januarys alters my opinion that this is quite possibly the most enjoyable month of the year;  everything lies ahead – with all the promise of the four seasons and, for one only too brief moment, all the garden within one’s control.  Beds can be mulched (and any recalcitrant weed quickly covered so that it is out of sight and out of mind – and with this spread of leaf mould (only possible because it is not freezing) the beds look sparkling and inviting to the snowdrops and winter aconites that are just about to push their little faces out.  And the daphne promises its wonderful scent as it just starts to break bud.

Meanwhile, the hamamelis is gaining impetus, becoming yellower (or redder depending on the species) with every passing day.  How can one not be enthralled by the fact that there is, under this cold earth, such a stirring movement upwards towards the light – even this watery, wintery light.  I stand in awe of the brave little plants that emerge, crisp yet appearing to be fragile, sparkling and scented – a scent that is to me, often akin to the smell of fresh ironing.

So for now the work in the garden is one of choice rather than dire necessity. Mulching can be done, there are winter shrubs that can be pruned before the sap starts to rise and roses that can be prepared for their still far off bud burst.

I find the late winter pruning of roses one of the most therapeutic jobs – the rose will thank you for taking out the wispy bits and those stems that are definitely harbouring black spot (with tell-tale purple and black splotchy stems) while the look of the plant will immediately open up with the removal of a badly placed stem right at the base.    And now is your chance to get the rose to shoot in the direction your think is best by cutting to an outward-facing bud.  The only time I killed a rose by over-pruning was when Hollie, my wonderful gardener, had pruned a standard rose (Bonica) to perfection and I then came along and, fiddling about, pruned it again – the poor rose just gave up hope of a future – so leave it something to push from!

Tough shrubs such as buddleia, apple and pear trees, blackcurrants, any hardy plants that need rejuvenation, all will bear the brunt of your secateurs – provided they are sharp.   Just avoid pruning shrubs that have spent much energy since late last summer putting on wood that is going to carry flowers within the next six months – that would be a pity!  Deutzia and philadelphus fall into this bracket. The garden can be made as tidy now as it ever will be for the next twelve months. The rest of the year it will just be an aspiration. 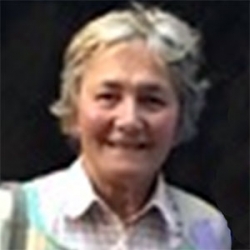 Griselda Kerr
If not in her Melbourne garden, author Griselda is probably designing, judging, writing or talking about gardening.

If not in her Melbourne garden, author Griselda is probably designing, judging, writing or talking about gardening.