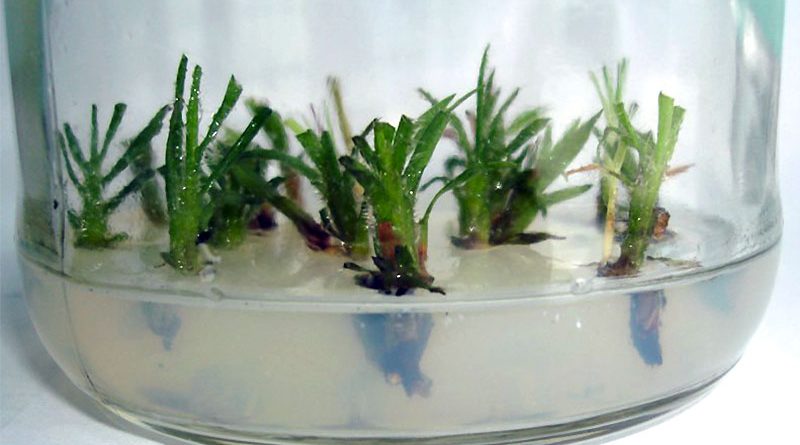 Gardeners like nothing better than browsing through a tempting new catalogue crammed full of colourful plants; some dependable traditional varieties but often something different labelled as new. We are very unlikely to wonder how these new plants come on to the market and why there is such a wide variety to choose from. A visit from Mike Davey to Ticknall Garden Club in September gave us the answer to this very subject.

He has had a long academic career at Nottingham University in the Crop and Plant Division at Sutton Bonnington. His talk shed light on the remarkable world of genetic plant manipulation.

Conditions in his laboratory have to be tightly controlled with sterile workstations and filtered air flow to keep everything bacteria free to prevent contamination.

Cells of a plant contain all the genetic information to develop into a new plant and he took us through the basic procedure of micro propagation as simply as he could.  He used petunias as an example. Pieces are cut from a leaf and immersed in sterile dishes containing a high nutrient culture medium and gelling agent. When left in the sterile storage cabinet at a constant temperature of 25 degrees cells grow and divide round the wound on the leaf. This method can produce up to 5,000 new plants.  Traditional leaf cuttings might only produce 1 to 5. The benefits for commercial production are obvious. A large range of plants can be propagated this way from their stems, leaves or roots. Much of this mass production is carried out in China and California. A more advanced technique strips the cell walls and takes the internal tissue to create a soup of naked cells which can be regrown to rebuild their cell walls and regenerate a new plant. Cell fusion is also used to create new hybrids, but the process is costly as the likelihood of success might be as low as 1 in 10 million.

Mike Davey emphasised that plants have always undergone genetic change whether naturally or by cross breeding and selection. Mutations of DNA occur all the time too, but the contentious issue is the extent to which deliberate intervention is used by increasingly sophisticated scientific techniques. Genes can now be isolated and inserted into plants to improve food quality, improve production and disease resistance so providing more food for an ever-growing world population. It has enabled the production of insulin from plants to satisfy an ever-increasing demand. However, despite great benefits the speaker cautioned scrutiny of future developments.

With a lifetime’s experience behind him, Mike Davey gave a knowledgeable and enlightening insight into the horticultural world of which most of us are completely unaware.