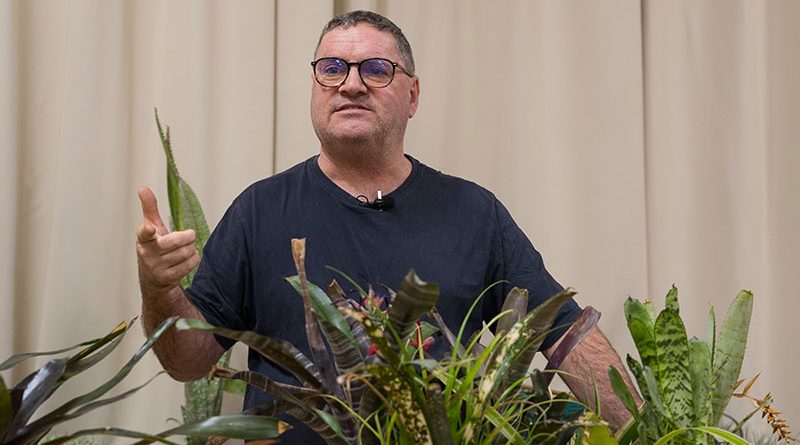 Plants, but not as we know them!  Don Billington came to Ticknall Garden Club’s January meeting and opened eyes to a group of plants that thrive with little or no root system. Called bromeliads, they derive their food from sun and moisture. They are popular as house plants but in the wilds of places like Costa Rica and Ecuador they can be seen in profusion clinging to trees and rocks. They are epiphytes but not parasites and only use their host as a perch.

Don’s lifelong fascination with this unique family of plants began early in his career in Liverpool where he worked in the glasshouses at Croxteth Country Park. He was given responsibility for the collection of bromeliads there. Soon after branching out on his own he entered a display of bromeliads at the Malvern Show and was amazed to get a gold medal. On his first attempt at Chelsea he also got a gold medal and for the following eight years has continued his success. He now holds three national collections of bromeliads in his own right. He has become an expert on them and advises the RHS and Kew Gardens and has close links with Holland where these plants are grown on a commercial scale. In fact, he described how one man sitting at a computer is in charge of the growth of thousands of plants. They move in bulk on a conveyer system and every step is automated to the finest detail.

The Neoregelia group generally grow in a funnel shape rosette of leaves and water is stored in their well. Some leaves are brightly coloured or variegated but their flowers are insignificant. The Billbergia group tend to have more strap-like leaves or a wider funnel shape. Their flowers grow tall from the centre of the plant and can be quite striking. They tolerate cooler conditions so are easier to grow. Aechmea are mainly funnel shaped with an upright flower. Some have spines. They make good houseplants. All bromeliads need watering with rainwater but only sparingly.

Another very interesting group is the Tillandsia. Commonly called air plants, they create a sticky substance to glue themselves to any surface. They have tiny scale-like leaves covered in special cells which absorb water. They have a silver-grey appearance in a wide variety of different forms which make them popular as indoor plants. They make striking plant displays. They are best watered by dunking upside down in soft water or misted with a fine spray. When bromeliads flower they die but usually develop offsets or pups to make a new plant.

Don Billington has a particular affection for air plants. It has led to considerable expertise in creating interior displays and he has fulfilled commissions for celebrities. He demonstrated how easy it was to make an interior decoration by wiring a variety of plants to either driftwood, a mesh frame or bamboo structure. Reindeer moss which stays green is useful for additional effect. It was no surprise that he has also made a name for himself as a flower arranger.

Don entertained with typical Liverpudlian sense of humour while revealing surprising artistic talents and depth of knowledge about the strange world of bromeliads.