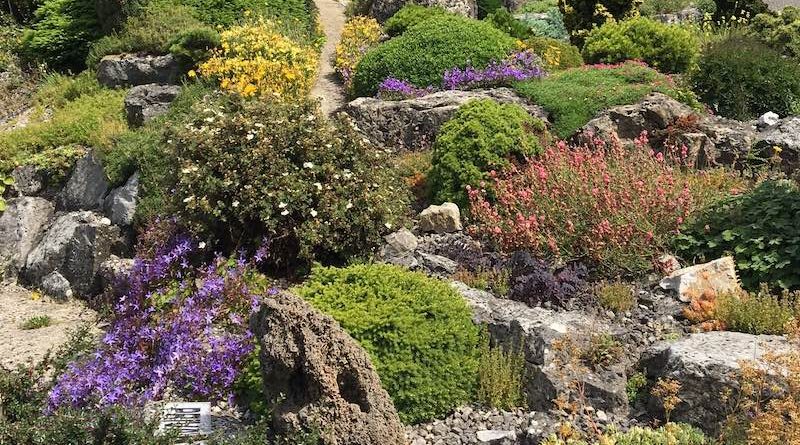 The secret of success in making a garden to suit alpine plants is all in the construction and the maintenance thereafter. At least this was the message that Jeff Bates was keen to get across at his talk to Ticknall Garden Club at their meeting on July 9th.

Think Dovedale with its craggy rock outcrops at the summit then moving down stony scree slopes to a flowing river at the base. Few gardens can aspire to duplicate this effect but aspects of it can be copied. Stone walls and even the smallest stone trough can be home to exquisite miniature alpines.  The really delicate gems need a well-ventilated greenhouse to give them protection.

Alpines are high altitude plants; hardy, compact, low growing and rooted in poor, free draining soil. They cannot survive in damp cold conditions. They should be planted in a mixture of one third loam, one third grit and one third leaf mould with the addition of bonemeal.  They need a very thick mulch of grit or any other material to protect roots. Remember to trim after flowering and feed with bonemeal. He emphasised meticulous weeding. Because such a free root run has been created, any weed can take advantage and put down roots that are difficult or impossible to remove if left to establish.

Jeff showed examples of established rockeries; some good, some not so attractive. Success is all in the positioning of rocks and plants. Rocks should mimic natural backward tilting strata with plants placed under their shelter and in crevices.  The bigger plants and conifers need to be at the lower level. A useful tip for planting in crevices is to wrap dead turf round the roots to squeeze the plant into the gap. He particularly recommended visits to the long established one at Sheffield Botanical Gardens and the newly reconstructed one at Hidcote Manor.

Originally in the Victorian era, when the interest in geology flourished, the emphasis was on the rocks themselves and this can be seen at Chatsworth where huge structures can be seen to this day. As time went on, with plant exploration so popular, the emphasis was on constructing a suitable site in the garden for all the new species being discovered. In the early 20thcentury rockeries were the dominant theme at Chelsea Flower Show. Prior to 1940 every garden incorporated a rockery but then they gradually dropped out of fashion.

Perhaps they are now due for a comeback. Certainly, under the wise guidance of Ticknall Garden Club’s favourite speaker, we now know how to get it right.