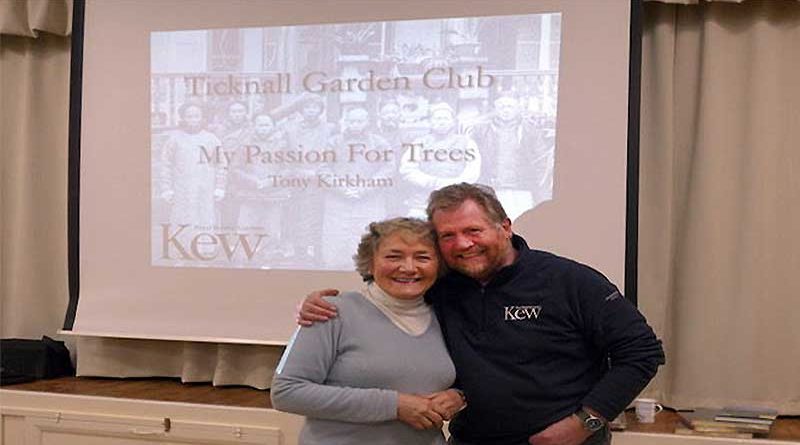 Ticknall Garden Club enjoyed a double helping of garden delights at its January meeting. Not only did it play host to Tony Kirkham who is head of the Arboretum at Kew Gardens but it was also given advance notice of an exciting new gardening book due to be published in May.

The book The Apprehensive Gardener has been written by club member and Melbourne resident Griselda Kerr who has developed her own impressive garden there at The Dower House. The contents of the book are based on her own practical experience which she jotted down month by month in her diary. Its aim is to be a support and reference guide for a gardener of any ability whether new or experienced. Tony Kirkham’s vast knowledge of trees makes its own contribution to the book in giving expert guidance on their planting and care.

The theme for Tony Kirkham’s own talk was A Passion for Trees. He has managed the care of the thousands of trees at Kew for nearly forty years. In that time he has gained in-depth knowledge on all to do with trees. He described the devastating results of the Great Storm of 1987 when Kew lost hundreds of trees, many of them very old. In retrospect, it proved to be a positive event. It provided the opportunity to restock with a wider variety of trees and in the study of the roots of fallen trees planting techniques have improved. Kew now has a rejuvenated Arboretum. It also gave him the opportunity to travel the world in search of new and rare varieties. He loves to share the joy he feels when he has discovered a rare tree in the remotest of places. It leads to adventures as when finding the seeds of a rare pecan tree in the droppings of a macaque and a hard arduous climb to get seeds from a tall tree only to find them around the next bend on a small tree.

His favourite tree and proudest collection item is the rare Chinese tulip tree, Liriodendron with its striking yellow flowers and wonderful autumn colour. It now takes pride of place at Kew. He also waxed lyrical about the dawn redwood tree, an ancient and long living majestic tree.  It is a deciduous conifer native to China where it is known as the water fir and where it was rediscovered after been thought to be extinct in the wild. It is now the most commonly planted tree in the world. Tony highly recommended the local nursery at Bluebell Arboretum at Smisby as the best source for buying trees. He and Robert Vernon share the same passion for trees.

Tony Kirkham’s own personal crusade has been to retrace the steps of Ernest Henry Wilson, a great plant hunter who first visited China in 1899. He went back there many times and as a result discovered hundreds of new plants which bear Wilson’s name and are planted all over the world. Wilson took many photographs on his travels and Tony managed to replicate some of them showing the landscape in remote areas had hardly changed.

Tony Kirkham begins his day very early in the morning with a walk round “his trees” in Kew Gardens in the company of his spaniel. His many years of looking, learning, planning and hard work have resulted in a magnificent Arboretum which has a worldwide reputation thanks to his passion for trees.