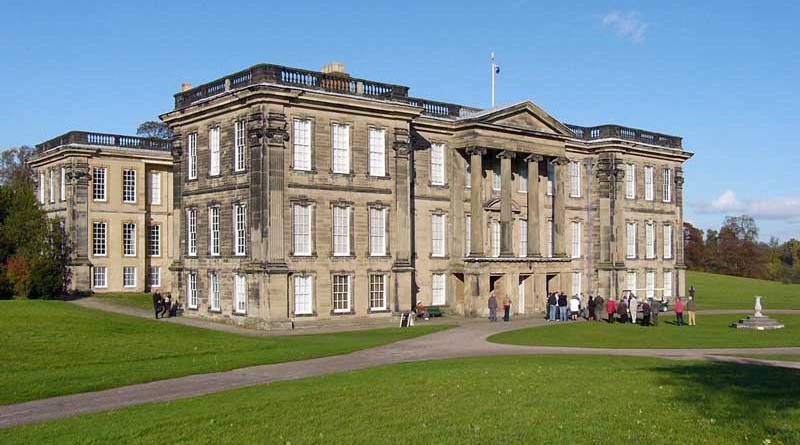 Who lived at Calke Abbey? Were they Harpurs, Crewes, or Harpur-Crewes? The truth is, they all did. Over almost 300 years, from 1622 when Mr Henry Harpur Esq., third son of Sir John Harpur of Swarkestone Hall moved to Calke House, or Caulk Hall (it wasn’t only the family who changed) they used different names over the years.

The first change occurred when, in 1626 Mr Henry acquired the title of Sir Henry Harpur by purchasing a Baronetcy from King Charles I, who came to the throne in 1625 and always needed money to fight in Ireland. This did not elevate the family to the peerage, but lifted them to the “top of the tree” of commoners, and with an inheritable title down the direct male line.

The second Baronet, Sir John, and the third another Sir John, retained the name of Harpur, as did the fourth, also Sir John, who married an heiress, Catherine Crewe, daughter of Lord Crewe of Steane in Northamptonshire.

The fifth and sixth Baronets, both called Henry, were both Sir Henry Harpur, although the sixth was known as Harry.

The seventh Baronet, another Henry, applied and succeeded in changing his family name by Royal Sign Manual, from Harpur to Crewe, and was allowed to quarter the arms of Crewe with those of Harpur, but was unsuccessful in his main petition, i.e. to have the Barony revived and become Lord Crewe, a claim he based on his great grandmother’s family name and the lack of a male heir to continue the Crewe line. He did, however, change the name of his house to Calke Abbey, despite it never having been an Abbey, but originally an Augustinian Priory.

Confused? It gets more complicated.

The eighth Baronet, Sir George Crewe, applied to change his name back to Harpur, but his mother, the Dowager Lady Crewe did not agree, and no proof of an actual application has been found.

The ninth Baronet was known as Sir John Crewe and the tenth and last Baronet Sir Vauncey Crewe. He was also known in the vernacular as Sir Vauncey Harpur Crewe. His only son Richard called himself Crewe but did not survive his father to inherit the title. Sir Vauncey’s other four children, all daughters, had a further complication, all having to change their name to Fynderne, in honour of a very early ancestor, Jane Finderne, (sic) wife of Richard Harpur, grandfather to the first Sir Henry, in order to benefit from their Uncle Hugo’s will, this being quite common at the time. They all changed in turn then reverted to their original names, all legally. Son and heir Richard already had the second name of Fynderne.

When Sir Vauncey died with no surviving male heir, his eldest daughter, Hilda, by then married to Godfrey Mosley took over the running of the Estate, but having no children, left it in trust to the three children of her sister Frances, namely Charles, Henry and Airmyne Jenney.

In order to inherit, the children had to change their name to include either Harpur or Crewe and all three, in turn, decided to keep both names, becoming Harpur Crewe. Charles was the first to change, followed at a later date by Henry and Airmyne. The legal papers were submitted to effect this change and were returned with an added hyphen, so the last family residents of Calke Abbey became Charles, and then Henry and Airmyne Harpur-Crewe. None of the three children married and the National Trust took over the property in 1984/5.

The last true Harpur-Crewe, Miss Airmyne, passed away in 1999, spending her last years at Warslow Hall, the family’s second well-loved home in Staffordshire.