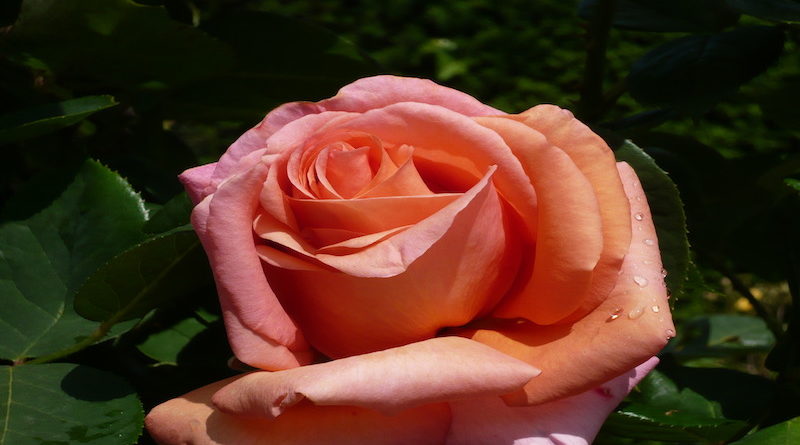 It was roses all the way when Stuart Dixon gave his illustrated talk to Ticknall Garden Club at its February meeting.

Perhaps surprisingly the rose family is the biggest in the plant world and includes such diverse members as the apple, strawberry, hawthorn, spirea, lady’s mantle and cotoneaster. Examples exist in the oldest fossils on earth. The speaker himself grows many varieties of rose in his own garden at Stoke Bardolph, Nottingham. It was once owned by Lord Carnarvon the Egyptologist but it later became neglected and unloved until taken over by Stuart and restored to its 18thcentury splendour. The old stone walls are now home to pink Felicia with its musk scent, climbing Mrs Sam McGredy and white Rambling Rector with its growth so prolific and thorny that it would deter any burglar. All old favourites, they are intertwined with large flowering clematis to extend the display.

With family living in New Zealand Stuart has made many visits there and was delighted to meet Sam McGredy who, as a fourth generation rose grower from Northern Ireland, moved there in 1972 to escape The Troubles. The climate is very conducive to the growing and breeding of roses and he exports many of them to America. Roses are used informally as border shrubs and they flower in abundance with a stronger perfume; particularly hybrid teas like Ingrid Bergman, Blessings and Walter Gregory.

Another rose grower he admires is the recently deceased David Austin who developed a new type of rose after many patient years of cross breeding Old Roses with modern shrub roses. His first success was Constance Spry which dates as far back as 1961. Since then hundreds more have been bred and are exceedingly popular. He discussed in detail the flowers with their great variety of different shapes and habits. Molineux, Shropshire Lass, Sophie’s Rose and Tess of the d’Urbervilles were just a few examples.

Peace is regarded as the most famous rose of all time and has an interesting history. It was being bred in France when Germany invaded. With its development under threat a few seedlings were smuggled to America. Its breeding continued in France and was sold under the name Madame Antoine Meilland. Unknowingly it was also being grown in America and in 1945 it was officially given the name Peace on the very day that the Second World War ended.

The talk was a welcome reminder that many roses stand the test of time and although constantly being replaced we should not forget the likes of Iceberg (1958) Dorothy Perkins (1900) Shropshire Lass (1968) and Queen Elizabeth (1954).

The admiring gasps at photographs of one perfect example of exquisite form and beauty after another demonstrated why the rose always remains the nation’s favourite flower.

Ticknall Garden Club’s next talk will be on Woodland Gems by Dr. Andrew Ward on Tuesday March 12that 7.30 pm in Ticknall Village Hall. Plants will be on sale.