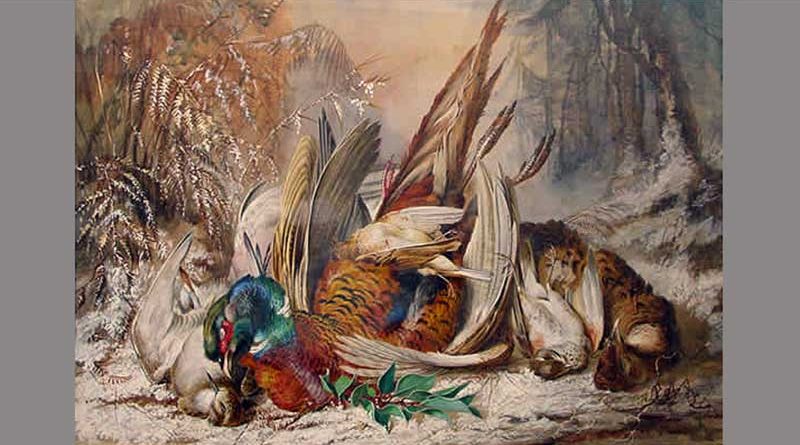 William Dexter was born in 1818 in Melbourne, Derbyshire, to parents William Bull Dexter of Shepshed and Jane Smedley of Melbourne. William and Jane were married in Melbourne Parish Church on 4 March 1811. Jane’s parents John Smedley and Mary Toone are buried in Melbourne Baptist cemetery.

At a young age William was an apprentice at the Derby China Factory where he painted fruit, flowers and birds in the oriental style of decoration. Here are a few words written about William by my father in 1974:

“William born in 1818 in Melbourne married Caroline Harper, a professional clairvoyant with a practice at 114 Collins Street, Melbourne. William and Caroline married in Nottingham in 1841 and in later years they emigrated to Australia but lived apart from 1856. William was in partnership in Sydney with his cousin William Smedley, as artists, sign writers, varnishers’ etc. William died in poverty in Sydney in 1860, at the age of 43. His cousin William Smedley buried him and paid the funeral expenses.”

William did many paintings in Sydney and he and Caroline set up a ‘Gallery of Arts and School of Design’ in the city, but the grand venture soon floundered and in 1856 they relocated to Gippsland. You can find more about William Dexter on the internet.

There is a book “folie a deux William and Caroline Dexter in colonial Australia” by Patrick Morgan printed by Quakers Hill Press. It is a fascinating read. William Dexter may not have been a great artist but he was definitely a talented one. However, I do find him slightly eccentric, with a tendency to laziness and I certainly don’t understand his penchant for painting deceased birds.

William’s brother Walter Dexter, my gt gt grandfather, married Abigail Tryphochia Dick in St Mary’s Church Nottingham on December 23rd 1841. Walter himself was a talented artist and inventor. When Walter was 50 years of age he and Abigail left Nottingham for New York, in connection with the setting up of lace machines. Several of their children joined them at intervals, but my gt grandfather Walter John Dexter was the only child to stay in Nottingham.

After many years Walter and Abigail returned to Nottingham and they died there as did some of their children.

Annie Noble (Nee Dexter) sister to Walter John Dexter was one of the children who settled in the USA. Annie’s gt grandson has written “Annie’s story” based on Annie’s diary and letters and I quote from her writing:

“Early in life my father (Walter Dexter) showed a genius for inventing things. At the age of 10 he had observed that the farmers’ around Melbourne had trouble in coping with the ridding of rats. The traps they used would only catch one rat at a time, so he invented a large trap with a swing door from the topside of the door. When a rat went in through the door, it immediately dropped back into place. There were 10 rats in the first catch and the 10 year old boy became famous.  At 16 Walter invented an addition to the lace machine, which again brought him into note.”

“Most of his later inventions had to do with lace machinery, and I understand that his name is enrolled in the Historical Annals of the City of Nottingham where he lived most of his life.”

My father Alec Watkins was in the lace business and told me that it was part of the Leavers lace machine that Walter invented. When Walter and Abigail set sail to America they had been living in West Bridgford, Nottingham, in some comfort.

My gt grandfather Walter John Dexter was a lace designer and I have original samples of his work. Walter John’s daughter Eva Charlotte Dexter was my grandmother.

Eva married Will Watkins from London, a lithographic artist and cabinet maker. Will and Eva lived in Sherwood Nottingham and had three children, Dudley Dexter, Dorothy and Alec.

If like me you were a reader of comics in your childhood, you may find Dudley Dexter Watkins’ work more exciting than William Dexter’s choice of art work. I realise this is a matter of taste and that I am biased! Dudley was the creator and first artist to draw Desperate Dan in the Dandy, Lord Snooty in the Beano and many other comic characters including The Broons and Oor Wullie, which are still found today in the fun pages of the Scottish Sunday Post.

Dudley’s artistic genes must surely have travelled down the Dexter line but his father Will Watkins was also a fine artist and I have a painting of his on the wall above my desk.

From an early age Dudley was described as a child genius. From the age of 15 he attended the Nottingham School of Art, which is now Trent University and had also worked in the Art Department at Boots.

At the age of 18 Dudley left Nottingham for Dundee to work for D C Thomson. My grandparents, father and aunt stayed in Nottingham. Dudley certainly never attended Glasgow University as mentioned in many of the articles you can read on the internet. I have lovely memories of Dudley. He had an annual holiday with his family at my granny’s home in Sherwood, Nottingham.  Dudley was very affectionate and would envelope me in a kind of bear hug.

Because of Dudley’s workload he always brought work with him to Nottingham. I can remember sitting on his knee in Granny’s sitting room watching him work at his easel, ‘inking in’ and writing the speech bubbles on Desperate Dan. Quite tricky with a small niece on his knee I should imagine!

In 2013 Dudley was awarded the first commemorative plaque in a new scheme given by Historic Scotland for his work on The Broons and Oor Wullie. Dudley rubs shoulders with John Logie Baird. A terrific award considering Dudley is English! I attended the ‘ceremony’ with Scottish Culture Secretary Fiona Hyslop at Dudley’s former home in Broughty Ferry and later went to the D C Thomsons’ archive to see some of Dudley’s work, much of which I can remember from childhood. Dudley was also an excellent landscape artist and I have a few of his paintings.

Dudley’s sister my Aunt Dorothy was also an artist of some success. She painted a series of postcards in the early 1950’s of fairy like design, which are rather sweet and I have the collection of cards. Dorothy was a member of the Nottingham Arts Society and had many exhibitions of work at Nottingham Castle. In the late 1960’s Dorothy worked for Griffin and Spalding now Debenhams in Nottingham. The café on the top floor was called the Four Seasons and Dorothy painted four huge murals for the wall, ladies dressed in appropriate costume, spring flowers, autumn leaves etc.

When Dudley was here on holiday we would go out into the countryside with him and Dorothy where they would set up their easel’s and sketch. I have a rather nice painting of Epperstone Church and village houses painted by Dorothy.

A coincidence I came across recently. My mother’s grandfather John Godfrey together with his brother Samuel, had a lace manufacturing business in the Lace Market of Nottingham. The building 3 – 5 High Pavement which is now a restaurant and stands opposite the Pitcher and Piano pub formerly the Unitarian Chapel, is in a conservation area. At one time, after the Textiles and Costume Museum had closed on Castle Gate, gt grandfather Walter John Dexter’s lace samples were on show in 3 – 5 High Pavement which was being used as a lace museum. I find it incredible that two of my great grandfathers’ made use of the same building. Gt grandpa John Godfrey died in 1920 and gt grandpa Walter Dexter died in 1925. Who knows, maybe Godfrey Bros were selling lace designed by W J Dexter.

Two minutes from High Pavement some of Dudley’s comic characters are on show in a Weatherspoons’ pub. To quote Granny Watkins who would have been both proud and astounded “Well, I never!”

William and Walter Dexter have muddled me considerably during my family research, so I tend to think of them by birth dates. To confuse me even more, Walter John had a bother William, a son William and a son Walter who was also a lace designer.

When researching my Godfrey family of Park House, Carlton, Nottingham, in a direct line from Richard Godfrey born in Gedling 1532 to my grandpa John Harold Godfrey born in Carlton in 1881, 7 of the 11 names are John Godfrey. Little did my ancestors’ think that one day a gt x umpteen times granddaughter should decide to research her family history. A Christopher or a Michael would have most helpful!! So I guess in comparison the William and Walter Dexters’ of Melbourne have been easier to research.

In summing up the Dexters’ artistic ability, sorry William, but your gt gt nephew gets my vote every time!

Related to more talented and dead folks from a different (Melbourne) Dexter family.

6 thoughts on “The Melbourne Dexters”