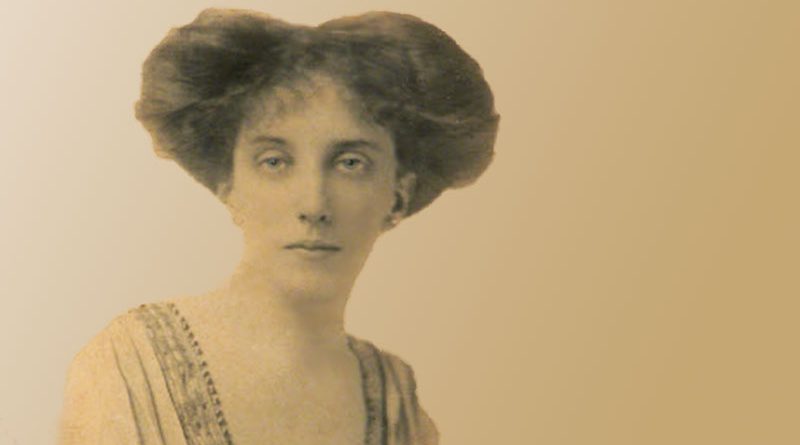 Winifred Harpur Crewe, always known as Winnie, was born into a privileged life in 1879. The second daughter of Sir Vauncey Harpur Crewe, Bart., she spent much of her childhood happily at Calke Abbey with her parents and siblings, one brother and three sisters.

This is the true story of Winnie and Bertie – Love and Loss at Calke Abbey.

Winnie’s life followed the usual and expected pattern of the “gentry” of the day, lots of good works, outings, theatricals, parties and balls, with frequent visits to “Granny”, the Dowager Lady Crewe, on the Isle of Wight.

Winnie and her sister Hilda, later Hilda Mosley, became debutantes in 1897 when they were presented to Queen Victoria, and probably would have been expected to marry a suitable young man, chosen by Papa and Mama, and lead a life very similar to their parents.

The turn of the century, however, was bringing huge social and economic changes, and Winnie in particular, as this map shows, followed a very different path.

She travelled some 23,000 miles, including a visit to South Africa and a 6 week motoring holiday to France and Spain in 1910 with her brother Richard and their Suffragette friends the Dugdales.

Her biggest adventure began in 1913 when she travelled to Burma, now Myanmar, against Papa’s wishes, with her cousin who had a new baby and was joining her husband and his Regiment in Burma.

In Mandalay she met a young Captain in the Punjabi Rifles, Albert Morton Senior, eventually returning to England on the same boat. As their very emotional letters to Winnie’s Mama prove they fell in love and were determined to marry, which they eventually did on August 10th 1914, in Ticknall Church. Bertie had received his posting back to Burma and left within two days of the wedding.

Winnie made the long sea journey the following year to join her husband, reaching Mandalay in July 1915, almost a year after the marriage. Her frequent letters home to Mama and Papa tell how she misses her family, and the clear air at Warslow, the family home in Staffordshire. They celebrate their wedding anniversary in the hills of Burma, and Winnie says they are gloriously happy and will never forget this day as long as she lives.

Early in 1916, Bertie is posted to Mesopotamia, now Iraq, leaving a desolate Winnie to make her own way home. The journey, at the height of WW1, was fraught with danger as they crossed the Mediterranean, narrowly avoiding mines and submarines. On arrival in London Winnie is met by Papa, Sir Vauncey, who stays with her in Durrants Hotel as she visits the India Office daily for news of her husband. Finally, on 16 May she receives the awful news, by Telegram, that Bertie had been killed on 22 April, later to be verified as being by so-called “friendly fire.”

A desolate Winnie returned home to Calke, where the family held a memorial service in Ticknall Church, Bertie being buried by the river in Iraq, and later recorded on the Basra Memorial, and on the Memorial in Ticknall.

With grateful thanks to Calke Abbey for permission to use pictures, and to Staff and Volunteers for sharing their extensive knowledge.