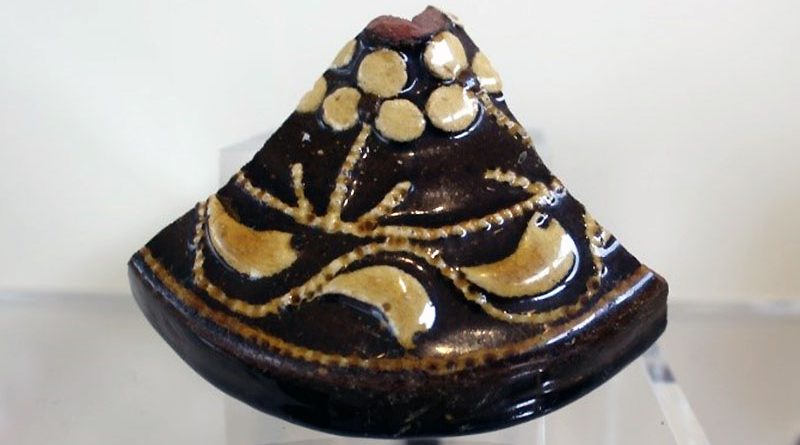 We all know about having a special mug with a design that really means something to its owner. A football club’s logo is perhaps the commonest example these days, so you can show the world who you support. Football clubs inspire intense, often lifelong, loyalty through good times and bad. They generate a sense of belonging within their communities and their followers will travel all over to support their team.

We might think it’s a cultural phenomenon peculiar to modern times, and so far as football is concerned, that’s right; the club loyalties really only developed after the structure of Association Football was formalised. But that need to have something tangible to identify with, to belong to a like-minded group, was just as strong in the late 1400s and early 1500. At the time there were seven or eight potteries in Ticknall, and someone here with a good marketing sense picked up on this trend. We don’t know who came up with the idea first, but we do know that once one potter had shown there was a market niche, the others copied him, and a whole new line of pottery began.

Round about 1450 a new type of finely potted tableware began to replace wooden cups. It was called Cistercian Ware because the first archaeologists to recognise it found so much on Cistercian monastic sites that they mistakenly thought it was made there. They were mainly cups with two or three handles, often with a rounded body and a tall flared rim. They were not made only in Ticknall – other sites making them were at Wrenthorpe near Wakefield, Chilvers Coton, and Potterton near Leeds. Where Ticknall scored was that our potters decorated their cups with unique designs that tapped into the mood of the times.

Cistercian cups were made at a time of intense personal Christian devotion. It would have meant a lot to the people who bought the pottery to have individual reminders of their faith in everyday use. They wanted to see the same visual representations of key aspects of Christian faith that they saw in church in stained glass, wood carvings, wall paintings and manuscript illustrations in the big Bibles used in church services. The decorative sprigs on the pottery may be made quite crudely but they are recognisably the common religious symbols from the time (1450 – 1550). People could show their personal devotion to their faith through their choice of designs, in much the same way as football supporters do today.

The Ticknall Archaeological Research Group has been able to dig on a number of ex-pottery sites, and we are very grateful to the site owners for permission to run digs. As a result we have found thousands of fragments of Cisterican cups and other vessels. They are all damaged in some way – what we find is the stuff that went wrong during firing, and was thrown on the tip as unsaleable. We rarely find a complete cup.

Here are some of the designs on the cups and what they meant to their owners, starting at the top with God who was represented by the sun. There are three versions of suns.

Jesus Christ comes next. His name in Latin was Jhesu Christu, and in those days the letters I and J were interchangeable. On the cups, his name was abbreviated to IHC. The fish was a general symbol for Christianity (as it still is).

The cross reminded people of Christ’s sacrifice to save them. Our potters used four different kinds of cross: a Greek cross, a Latin cross, a Jerusalem cross and a consecration cross.

The acanthus leaf also represented Christ, because the crown of thorns was made from the spiny acanthus. We find three versions of it, and it’s by far the commonest symbol on the Ticknall cups.

The Virgin Mary was represented by a rose; she was the centre of a general cult of personal devotion because she could help ordinary sinners by asking for mercy on their behalf.

The wheel represented the wheel of eternity – it was meant to remind you that however you behave in this life will be reflected in the next. The good will go to eternal joy in heaven, while the bad will suffer the eternal tortures of hell. There were three types of wheels, and they were the next most common symbol on the Ticknall cups.

The Holy Trinity occasionally made an appearance on the pots, in the form of three equal circles placed as a triangle.

One of our potters also thought about the key features of the Mass, and put the bread and wine on some of his cups in the form of the Communion wafer and a bunch of grapes for the wine.

The potters were quite artistic in their designs, which were not confined to religious motifs. When Catholic symbols were outlawed under King Edward VI, our potters made cups with naturalistic designs to try to save their lucrative trade. Here are some flower and leaf designs.

One of our potters did a series of animal designs which are so well made that you can even see the claws on the dog. He did a bull and a pig too, as well as the fish.

You can see the pottery at any of TARG’s displays or talks.

But their efforts to save the Cistercian trade failed, and the cups disappear at around 1550. 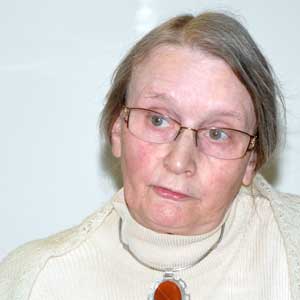 With a passion for Ticknall Pottery, historian Janet (and Sue Brown) literally wrote the book.