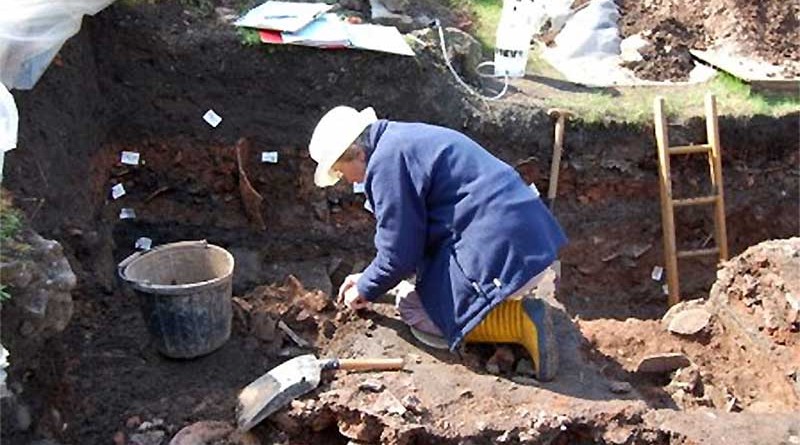 There are over 30 known pottery sites in the Ticknall area. Excavations have produced 13th century Coal Measures White Wares on production sites.

Documents from 1328 refer to “le cleyputs” and in the late 1200s “Henricus ad Furnum” (Henry at the oven) is named. It is probably a pot oven.

By 1538-1547 seven potters were paying tax. Archaeological evidence shows that Cistercian and Midlands Purple wares were being made in quantity by c1450. Cistercian wares (pictured right) were mainly finely potted cups with two or three handles, often decorated with religious symbols. Its production ceased by the 1550s.

Tall butterpots for selling butter in markets, and kitchen pots, were commonly made in Midlands Purple ware. Black wares followed by 1550 and Yellow wares by 1600, when potteries began to appear on the Common and Heath End, outside the village core. Most production was kitchen and dairy ware.

Ticknall pots were sold from Cheshire to Lincolnshire, and Lancashire to Oxfordshire, via markets. Potteries were family businesses with children trained by parents.

Competition from Stoke-on-Trent killed the trade, already declining in the 1700s.

The last pottery closed around 1888.

Bricks were made from the sixteenth century, and the last brickyard closed in 1939.