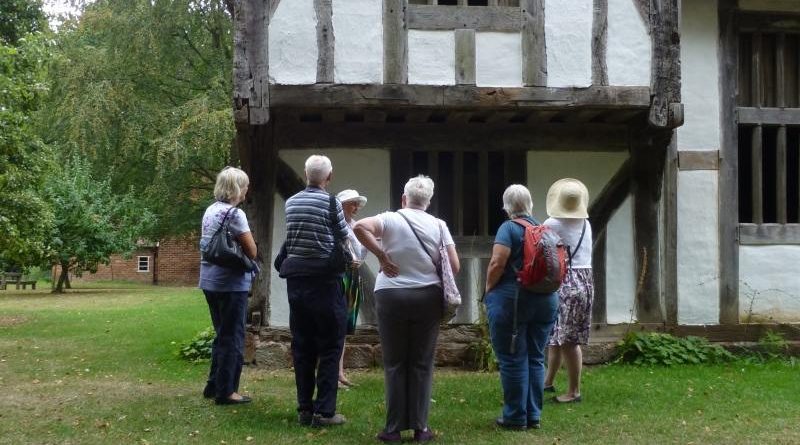 Avoncroft Museum is home to over 30 different buildings and structures which have been rescued and re-built in rural Worcestershire. The Museum is spread over 19 acres of beautiful Worcestershire countryside and includes a wildflower meadow, period gardens, a traditional cider and perry orchard, as well as the collection of historic buildings.

We had a beautiful day for the visit. Blue skies always provide a good backdrop to any building and the re-constructed buildings at Avoncroft would be good in any weather. We were all so eager we arrived before they were open and once they opened the gates we discussed our plan of campaign over coffee and cakes.

There were over 30 buildings of various ages to explore. Janet’s gentle hints to remind us which period we were looking at, which way the beams were laid and whether there was a “Dragon post “ or “Jetty” just makes a visit mean so much more. There were also some smaller collections to see as well such as the National Telephone Kiosk collection. The museum has cleverly converted the largest hall into a meeting room called the Guesten Hall and have decorated the internal beam ends with corbels carved in the shape of heads (all people involved in the creation or running of the museum).

The museum has also converted a beautiful old Co-operative store into an Edwardian Tea Room which we all found our way to again in time for lunch.

There was at least one person who was disappointed that the Model (Ride on size) Railway was not available to the public that day due to a private party having hired it for the day!

All in all we had a very instructive and enjoyable day. Thanks to Janet and Sue for their sterling efforts.