With a population of just 642 (2018), Ticknall is situated in the heart of England, just south of the river Trent, 9 miles from the city of Derby and is widely regarded as southern Derbyshire’s most attractive village. It is perhaps best known today for Calke Abbey which is the second largest stately home in Derbyshire (after Chatsworth). 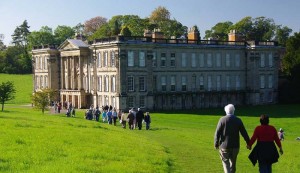 The house was built on the site of a 12th Century Augustinian Priory and stands in 750 acres of parkland.

The property, dubbed ‘the house that time forgot’, was still in private ownership, being occupied by the reclusive and eccentric Harpur-Crewes until it passed to the National Trust in 1987.

The charming Georgian town of Melbourne (pop. 4,404 in 2018), the jewel of South Derbyshire and the birthplace of Thomas Cook the travel pioneer, is just two miles away.

Close by is Stanton Causeway, a scheduled Ancient Monument, and Swarkestone Bridge where on 5 December 1745 Bonnie Prince Charlie abandoned his march on London and turned back to Scotland.

The bridge and causeway still carry the busy A514 traffic over the River Trent and flood plain between the city of Derby and the South Derbyshire administrative centre of Swadlincote.

Just 5 miles upstream from Swarkestone is Repton, capital of the ancient kingdom of Mercia and site of the mausoleum of the Mercian Kings, located under the 10th Century parish church of St. Wystan’s.