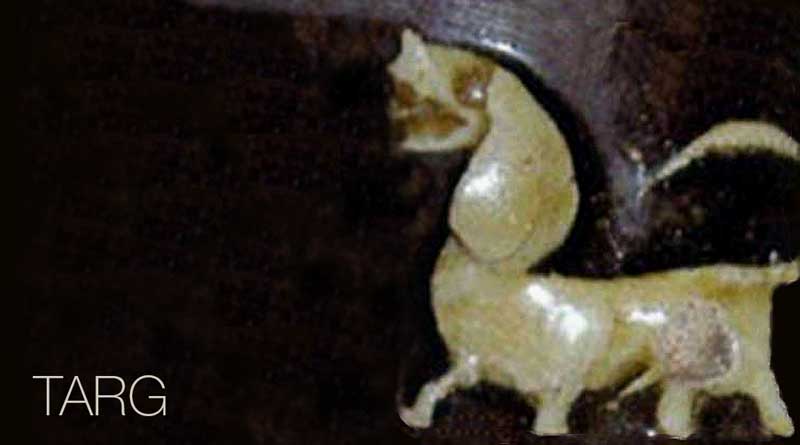 We started in 2010 with a ‘Your Heritage’ grant from the Heritage Lottery Fund over 3 years, to investigate the archaeology of Ticknall’s potteries and its landscape history.

After ten years, the Ticknall Archaeological Research Group is still going strong and we have extended the range of activities. We still do digs on pottery sites, courtesy of the landowners and householders. We have had some of our finds confirmed as made in Ticknall by chemical analysis, which gives a distinctive signature.

We now know that Ticknall’s pottery production goes back to the 1100s! Finely decorated pots were made, as well as lots of everyday wares for the kitchen and dairy.

In 2014 TARG uncovered what has been confirmed as the first, and so far only production site for Ticknall Bottles. This pottery form has previously always been referred to as Martincamp Flasks and thought to be imported from Normandy.

Field walking is another regular activity, where we look for evidence of land occupation in the past. We have found Mesolithic and Neolithic flints as our oldest evidence, followed by Romano – British pottery and a Roman blue glass bead, plus a huge amount of local pottery. All this is sorted and recorded, like the finds from our digs.

Each year we have done historical landscape walks for the group and are also studying the layout of the medieval village. A surprising number of the original plot boundaries still delineate the properties here. We have run day schools on understanding house development in support of this.

Other day schools have been on identifying Roman pottery, maps, old handwriting, pottery illustration, medieval gardens and trying out how to knap flint tools. This was more difficult than it seems, but great fun.

We have carried out tree recording in Calke Park for the National Trust, and we have been able to assist the Trust with excavation work, identifying items from their store and helping with Calke Archaeology Club.

We have a pottery illustration group which meets monthly to support the reports of our work.

TARG provided two information boards from our HLF grant; one at the village hall and the other at the top of the market place.

We have a sociable dinner each year in November.

The AGM is held (like many of our activities) in Ticknall Village Hall, usually in March. Visitors and new members are welcome; our subscription is £10 per year, which includes insurance