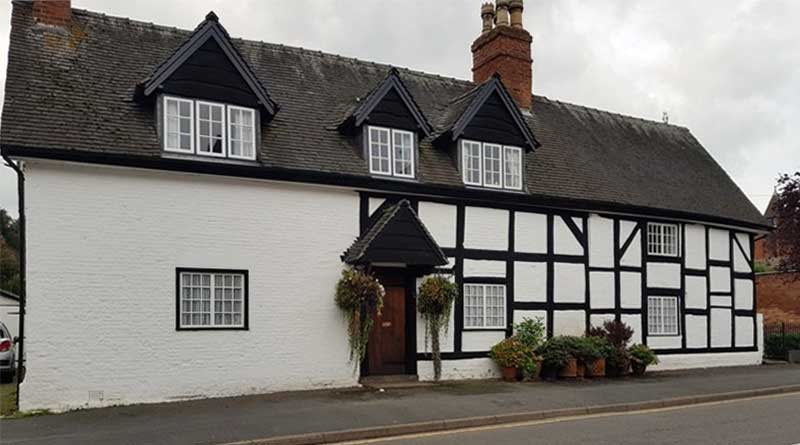 We met for coffee at the Bull’s Head, where, with the aid of a map, Janet gave us a brief history of Repton from Anglo Saxons, Vikings and their eventual settlement in 874, the changing course of the river, its mills, ferries and fords and the development of the village.

This was followed by a very interesting morning walking along the main street, with Janet testing our recollections of what we’d seen in previous walks, and pointing out and explaining numerous features and signs of how buildings have evolved over time.

One of the things we learned about was the development of sash windows, influenced by window tax, fire prevention regulations and replacement of blown glass with plate.

The position of the white-rendered cottage,  gable end onto the road, shows it is a later rebuild on an original medieval footprint.

We saw how older buildings had been replaced, often on the same footprint. A good example of this is the mid-17th-century box-framed house (see main photo). The steep pitch of the roof and tall chimneys indicate it was originally thatched. Brick would have replaced stone/lath and plaster probably 1580s/90s. The left-hand side has been completely replaced.

Tudor Lodge is a good example of how to spot a ‘baffle entry’. The front door leads into a lobby, where the side of the chimney stack is in front of you, providing fireplaces in the rooms on both sides.

After lunch at the Bull’s Head, we met Mr Paul Stevens at Repton School for a guided tour. He discussed the earlier excavations round the church and noted that there were possible foundations under the drive. We were shown the site of the medieval tile kiln, uncovered by chance when the playing fields were altered to make a cricket pitch. We saw the remains of the Priory church behind the Victorian school hall and Prior Overton’s tower, a rare brick building from around 1440, now part of a longer range. Round the central garden there are medieval remains in later buildings. The extent of the school’s memorial plaques to pupils lost in WW1 was sobering.

Inside we went through the original schoolroom with its raised dais for the teacher and heard about the harsh discipline of early lessons and the changing fortunes of the school itself. Portraits of headmasters from the 18th century, all clergy, ranged round the next room; two later heads went on to become Archbishops of Canterbury. Our last room was the medieval Priory undercroft, where one end wall is covered with medieval floor tiles found in the kiln, including the pattern that TARG found at Ivy Leigh. The opposite wall has pieces of carved stonework found on the site. It was a fascinating afternoon, thanks to Mr Stevens’ knowledge and enthusiasm.
(from Annette and Janet)