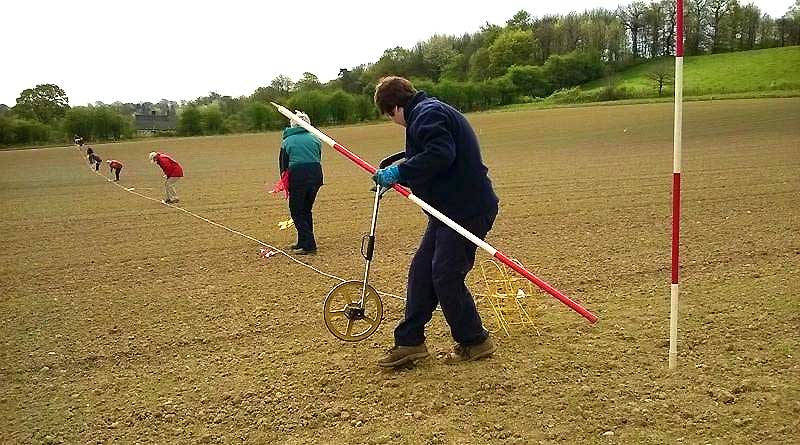 A large field, recently ploughed, 20 volunteers, eager to be trained, and a fine sunny day, what more could anyone want? This was the set up for the first of our two fieldwalking training days. Two professional archaeologists, Anne and Alex, had come to instruct us into the mysterious art of fieldwalking.

None of us had done anything like this before so we listened carefully to the instructions … measure the field, divide it in half, then into quarters, measure out the rope with 10m flags on it, all walk up the field in a line with the rope, getting it straight – not easy, putting in canes when told. However strange it seemed we ended with the field marked out in a grid, enabling us to record where finds have been picked up.

We were each allotted a lane with four stints in it, also four plastic bags for the finds.

Then all went quiet as we each selected bag A and began to meticulously work the first stint, picking up and examining objects of potential interest. We were looking for anything man-made – clay pipes, brick, flints and the ubiquitous Ticknall pot.

We had some interesting finds including a Tudor ‘ruff’’, which would a head on it and would have formed on a chafing dish, or a for a handle on a mug or jug. Also an arrowhead, a scraper, and numerous pot sherds.

Further training in finds recognition came with a finds training day and a flint knapping day.

We continue to do fieldwalking (weather and ground conditions permitting), now supervised mainly by our own Sue Brown.

Most of our finds are sherds of Ticknall pottery, dating from the 1400s to 1800s, including Midlands Purple, Brown Earthenware, Yellow Ware, Cistercian ware, lovely green glazed Medieval, and some Romano British Greyware.

More finds include various flints, the remains of an ancient shoe and a blue bead with a distinctive white swirl which turned out to be Roman.

Other useful finds include glass, -Ticknall pottery, clay pipes, metal objects, and kiln waste, i.e. clinker, burnt clay and ‘squeezes’, which are pieces of clay used to separate pots in the kiln.

These sometimes still have the potter’s fingerprints!

At our last field walk (June 2018) one of our finds was the tiny head of a dog, possibly the knob off a money box.

At the end of the day we all take our own finds home to wash and dry, ready for a session in Ticknall Village Hall where we sort them into types and weigh and record them.

Once recorded, the more are kept, many finding their way into our ‘pot drawing’ sessions.

The rest go back to the farmer for hardcore.