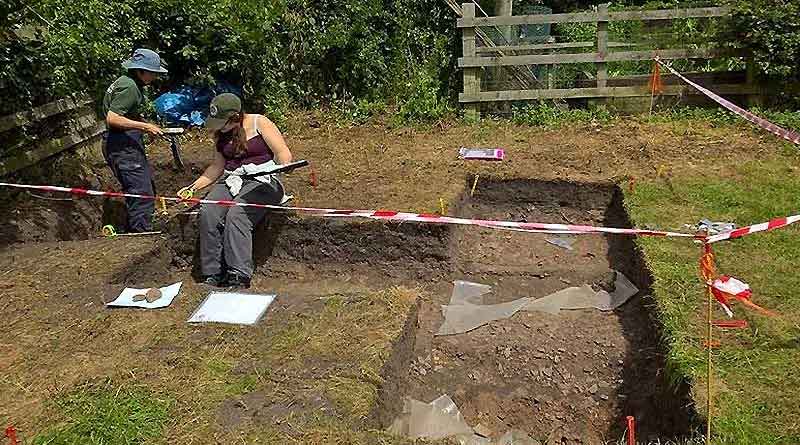 Following the 2016 and 2018 excavations, the primary purpose of the 2019 excavation was to reopen the principal 2018 dig site and its adjacent area in order to prove (or otherwise) the existence of one or more kilns. Last year’s dig found materials and finds consistent with a close proximity to a kiln structure.

This year we were able to welcome three new members to TARG, namely Mike, Jackie and Pam. All three were already experienced in archaeology, extremely keen and greatly assisted in the success of our venture.

There were quite a number of visitors to the dig. One Saturday was devoted to giving hands-on experience to members of the Calke Abbey Family Archaeology Club. Even though the weekend was a washout, it did not prevent these children from really getting involved and their enthusiasm was a delight. One young man found the base of a Cistercian cup and was so pleased that he returned the next day to wash it. Another slightly older group to visit was from the Derbyshire Archaeology Society, a group that was founded in 1878 to encourage interest in the county’s history and archaeology. In preparation for their visit, Sue laid on a display of finds from our previous digs at Springfield Barn which included some beautifully decorated pieces of Cistercian ware. Again, heavy rain marred their visit but they all seemed to enjoy themselves. Last, but not least, we had a number of visits from the National Trust, including one visit from six of their archaeologists from across the country who were attending a meeting at Calke Abbey.

During the dig an exploratory 3 metre trench was dug approximately 10 metres from the principal excavation, where high resistivity analysis indicated a possible structure away from the kiln site, possibly a drying shed. While the trench did produce some nice Cistercian ware sherds and other pottery finds, nothing indicated the existence of any structure.

While the post excavation work may prove more conclusive, the principal site left us with more questions than answers. Yes, there were indications of the existence of at least one, possibly two, kilns and we certainly found a large heap of broken saggars which were presumably in very close proximity to the kiln. There was also a substantial area of crushed pottery that may have indicated a working area adjacent to the kiln and/or a path leading away from it. Jeff, our resident archaeologist, concluded that we needed to break through the level attained to date to come to a more positive conclusion of what we’ve found so far. Here’s looking forward to the next dig, hopefully with better weather!
(from Peter)

Following on from dig, all those who have been available have been spending time in Sue’s garden and Janet’s garage and Ticknall Village Hall, sorting, identifying, categorising, weighing and bagging up the finds from the dig. Some 95 or so trays of finds from different contexts (layers of the trench) have given us much to ponder over. Among the more interesting finds was a style of Cistercianware decoration we hadn’t seen before which looks like a stylised tree.

All sorting, weighing and recording was finished by the end of October and is now with Jeff for analysis.
(from Sue P.)

A good two weeks. The weather was kind, and as expected, there were lots of pot sherds to wash, from possible medieval to around 1660, but most importantly we uncovered what is possibly a kiln or a pot stack.  Also, resistivity shows a path leading to the work area.

Thanks to everyone who took part, and very special thanks to Jeff – a new member, who as a former archaeologist gave us more in-depth training.