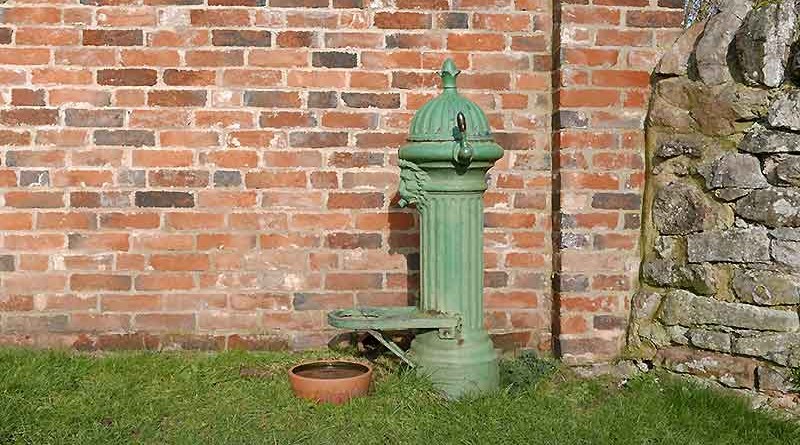 Visitors to Ticknall often ask about the cast iron water spouts that are seen in various places in the village.  They were part of a public water supply installed on the instruction of Sir Vauncey Harpur-Crewe in 1914.

The pillar fountains are Grade II Listed and were manufactured by Glenfield and Kennedy Ltd of Kilmarnock. The Fountains were fed by gravity from a reservoir filled with water drawn from a well by wind-pump.

The following account by long-time Ticknall resident Roy Hammerton is taken from his excellent paper on The Waters of Ticknall and Calke. (See download link at the bottom of this article.)

Around 1913, Sir Vauncey Harpur-Crewe initiated a scheme to take Ticknall’s water supply out of the Middle Ages! With the co-operation of the then local authority – The Hartshorne and Seals Rural District Council – it was agreed that the village should be watered from a number of standpipes, which would be gravity fed from a reservoir to be served by a wind pump.

The original Easement and Layout Plan is in existence, although no accounts appear to remain for the venture. The Kilmarnock firm of Glenfield and Kennedy Ltd, (Specialists in Hydraulic and Sanitary Engineering, and copies of whose brochures are in the possession of the Ticknall Preservation and Historical Society), were engaged to supply the hardware. The firm produced a vast array of such wares, which are still to be seen today in Suffolk and Bedfordshire, in Newtownards and Dundalk in Northern Ireland – noted even on the streets of Port Stanley in the Falkland Isles, and surviving no doubt, elsewhere in the world. The original dies for the casting of the iron Self Closing Fountains, as they are officially designated, were known to be still in the possession of Messrs. Bivalve of Clay Cross, Derbyshire, who took over the Glenfield and Kennedy Plant – although Bivalve was itself taken over in 2000.

These fountains are referred to variously as pumps or in the case of Ticknall as water taps, or simply as taps. Operated by a handle, the water emerges from a spout at the mouth of a lions head to fill any receptacle placed upon the bracket at the base of a fluted pillar. A grid there prevents debris from entering the channel which drains any surplus water. The pillars, some 3′ 6″ (1.05m) high were fitted with the Kennedy Patent Gun Metal Self Closing Valve and were considered to be virtually maintenance free.

One standing in the village today, outside the Methodist Chapel supports this claim – for it is, surprisingly, still in today (June 2019).

The secondary source of running water for the village emanated from a stream collecting in the area around Spring Cottage, near the point where High Street joins with Ashby Road. There, a number of wells, ponds and drinking troughs appear on the 1/2500 O.S. maps of 1882 and later (see Chapter 1). On the layout plan for Sir Vauncey’s scheme of 1914, the description “Drinking Place – to be filled in” appears. To tap into this source, a substantial pump well was sunk in the area close by in 1914. A brief delay was occasioned to the implementation of the scheme at this time, for the carter employed to transport equipment from Melbourne railway station was an army reservist, and it is understood that he was suddenly “Recalled to the Colours” on the outbreak of The Great War. The well stands today, its brick plinth some 0.3m. above the ground level, having a concrete cap some 4.0m.in diameter. A wind pump, having a steel lattice tower and fan blades was erected nearby, (the concrete blocks which secured its four feet are all that remain today). Its 4″ suction and 3″ return pump raised water from the well via a 3″ cast iron rising main, to a brick built and grass covered reservoir still lying to the south west of Scaddows Cottage on the road to Hartshorne.

Upon the redundancy of Sir Vauncey’s System in 1962, this reservoir was utilised by the South Derbyshire Water Board in association with their new mains, until itself being finally made redundant by Severn Trent Water in 1992. The pump, being dependent upon the wind for power, was supplemented fairly early on by a diesel engine housed in a brick building (now a stable) built close by. Close to it today stands another smaller brick building – the former Water Treatment Plant. Not connected to the 1914 System, to the south of the pump well today stands an electric Booster Pumping Station. This was erected by the South Derbyshire Water Board upon the installation of their new mains in 1962, to assist in the journey of the water to the Boundary Water Tower. From its high vantage at approximately 430 feet, the reservoir fed the village through a 4″ cast iron supply main which headed east towards the village. The tap at the far end of the system at the Melbourne turn stood at around 305 feet.

Upon the installation of mains water in the village during 1962, the original pipes were found to be in remarkably good condition – due, it is believed, to the high quality of clay upon which they were bedded. Upon the main reaching the Ashby Road near the Ticknall village entry a short spur ran to the south, where a tap is to be seen on the west side of the highway. This spur terminated at a recess, still to be found in the wall on the west side of the highway, opposite the outbuildings of Basford’s Hill Farm, where a hand pump was already installed. This feature was removed to the opposite side of the wall and into the field, presumably when modern mains water became but is not in existence today. The main also headed north along the highway into the village, where a tap was installed for The Green, with another close by also on the west side of the highway. A tap not now in existence was sited on the east side of Ashby Road in front of The Cottage. Passing the site of the spring well housing at Spring Cottage, where Ashby Road becomes High Street, the main fed a tap fronting No.53 High St., and then another standing before No.39. Both of them are sited on the east side of the road.

Crossing back to the west side of the road, a tap is to be found mounted within the 19th. century spring well housing opposite Sheffield House. To the west of the central junction in the village a tap, now removed, was installed against the north side of the wall of the first house on Burton Road, close to a former and older pump. The main then made its way east along Main St. (formerly Highwayside), where a tap stood on its south side where todays vehicle entrance to the Stone Fronts cottages is evident. Reaching Rose Lane, a spur led to the north following that lane, and onwards along Chapel Street, to its end at the wooden entrance gate for vehicles to the Calke estate. (It should be noted that the section of Ingleby Lane from The Wheel (P.H.) to Chapel Street did not come into existence until the 1980’s). On this spur, the sole remaining tap is the only one in the village which can be found still in water today. It formed the only source of supply for the Methodist Chapel, until that building was connected to the Severn Trent main in August 1992.

The principal main, passing eastwards from Rose Lane along Main Street fed a tap to the north side of the road outside No.33. On the opposite side of the road outside No. 38 stands another, its base now well buried beneath the sidewalk. Opposite The Wheel (P.H.) stands a tap stylishly white painted and embellished by a local resident. The row of cottages at whose south west corner it once stood, being long demolished.

Next comes a tap in Banton’s Lane. It is understood to be capable yet of emitting water, although being turned off normally, at the stop cock.
In a somewhat dangerous position today, on the verge to the south side of Main Street – a tap lies a few metres west of the old schoolteacher’s cottage, at the entrance to Calke Park. Fast moving traffic was obviously not such a problem in 1914! Passing beneath the Archway Bridge of the former 1802 horsed tramway, a tap on the south verge of the road is to be found opposite Arch Farmhouse. No more appear until shortly before reaching the Royal Oak Garage, where one is to be seen on the south side of the road, sited alongside an earlier hand pump. Another tap, no longer in existence, was sited adjacent to the wall on the south side of Main Street, and to the east of Horse wash Gate – the entrance to the limeyards.

And lastly, although no longer in its original position due to road alterations – the tap at the Melbourne turn is remarkable in that the pillar, its bracket, and the drainage grid have survived as a complete monument to the system, and are set into the cobbles of the traffic island. Although not connected to the above system – two more of this pattern of tap were installed near Top Farm, beyond the southern boundary of the village (See Chapter 4).

A total of 21 taps were installed – including the two at Top Farm. Of these 16 remain. All the taps remaining in the village today are on the Listed Buildings Register.

Upon Ticknall and its surrounding area becoming served by the mains of the South Derbyshire Water Board in 1962 Sir Vauncey’s System became redundant. Long before that time the wind pump had decayed and been demolished, with the pumping of water relying solely upon the once auxiliary diesel engine. In that year, in response to requests from local inhabitants the Water Board bequeathed the taps to the village, when the Women’s Institute took on responsibility for their care, and following the donation of paint from local builder John Smedley, the taps assumed their present green livery. Since that time the Parish Council have taken over the task of maintaining them.

Ticknall resident Roy Hammerton worked for much of his life with the local water authorities that we now know as Severn Trent Water. His excellent paper on The Waters of Ticknall and Calke gives a fascinating insight into the history of the provision of water in the area from the days when a plentiful and safe supply of water at the tap was far from common. Use the button below to view and/or download the document.

Waters of Ticknall and Calke