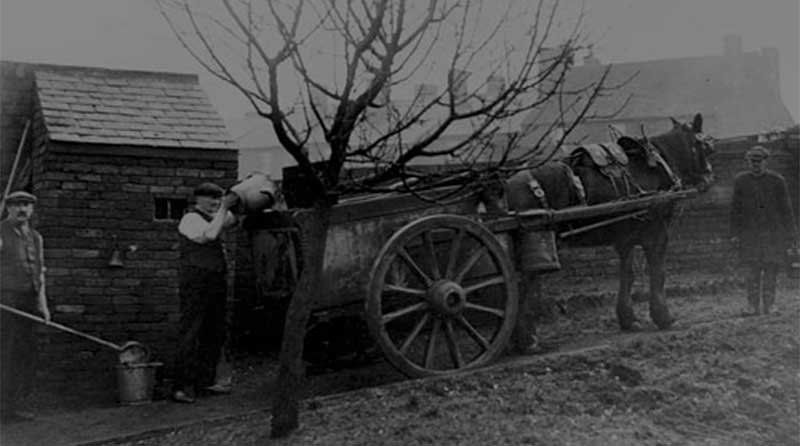 Nowadays we take a clean, constant water supply for granted. Yet it is surprising how recently this came to be the case.

Twenty years ago, Roy Hammerton wrote a treatise on the water supply in Ticknall and Calke for a booklet but this was never published. In 2016 we published the section on ‘Ticknall Water spouts’ here at Ticknall Life. Using information from the original 33,000 word definitive piece we will try, over a period, to give you an outline of this process.

One of the basic requirements of a settlement is a water supply and, in Ticknall’s case this was, in the beginning, obtained from a series of small springs originating from the higher ground towards Pistern Hill. This also served the priory buildings at Calke. These springs were subject to the forces of nature, having both glut and drought periods.

Some storage was obtained by the use of the Soft Water Cestem – the latter word a local derivation of ‘cistern’ – or water butts collecting water run-off from roofs and that this was soft water was soon appreciated. Examples of these could, and may still, be found on such buildings as the Old Post Office, at the corner of Church Street and Main Street (where it lay within the stone base of what was a farm building, was 12’ X 10’ and 8’ deep. The water was not used for drinking), Basford’s Hill Farm on the Ashby Road, and Top Farm (which had two cisterns, one which was fed with soft water from the roof and the other with fresh water from a stream) on the road to Ashby and White Hollows Farm beneath Pistern Hill.

Effluent and waste water of every kind simply ran into the streams. Typhoid was common and it was not until the great epidemic of cholera, in 1832, that universal action was taken.

But let’s get back to Ticknall. Through the centuries the supply and hygiene gradually improved. For many years the indoor use of the chamber pot was the norm. This would be emptied into the ‘privy’ in the morning and, subsequently, buried in the garden or collected by the Night-Soil cart. The advent of the earth closet was a distinct advance but, again, the contents would be buried in the garden. (indeed, an uncle visiting me from the country as late as the 1950s expressed concern at the suspect hygiene of having a loo indoors).

The Public Health (Water) Act of 1878 stipulated that no new house should be built unless it was in reasonable distance from a fresh water supply, thus beginning a series of acts that gradually began to drag the country from medieval times in to the present day. This was well-intentioned but, in practice, not of great value since most water sources were polluted to some extent. The water could be used for most household purposes but it was still prudent not to drink it, and it was common practice to drink small beer or, if you were of an age, something a little stronger.

It was not until 1962 that the arrival of mains water from the South Derbyshire Water Boards that water closets could be installed. By 1963 these were connected through pipes, aided by an electric pump situated close to the Horsewash Gate near the Limeyards, to what was then known as the Sewage Farm.

There were still cases where the household toilets had to receive a daily visit from the, often still horse-drawn, Night Soil Cart, a name it received because the local authority insisted that it should operate under cover of darkness i.e. by night.

Looking back, the ‘privy’ was not always that private. The one at the Methodist Chapel in Chapel Street, for instance, could accommodate two people. It is now at Sharps Pottery Museum, Swadlincote.