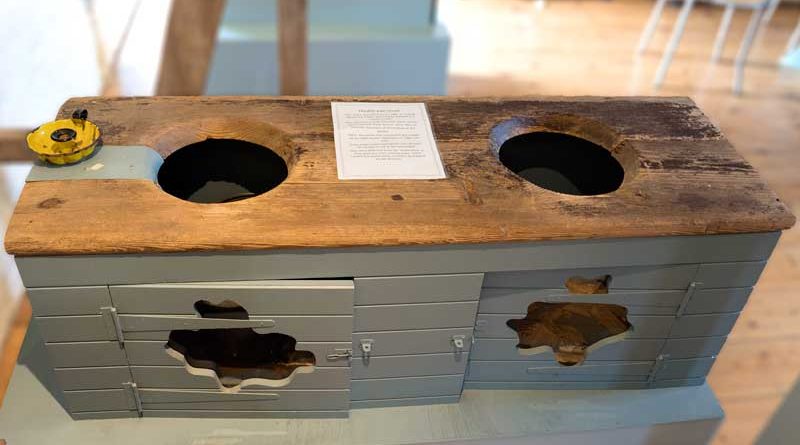 We finished the last article warmly ensconced in the double privy in the Methodist church, which article was sent to Sharps Pottery Museum, so, if you are not at lunch, we’ll explore these ‘facilities’ a little further.

I suppose the record in this country (perhaps the origin of ‘Privy Council’?) must be held by Hampton Court which has a 28 seater. Nearer home, the cottage at the Working Farm at Elvaston Castle has a two-seater with a smaller one for a child between! The larger communal privy, that with a log over a pit dug on the edge of the village (remember M*A*S*H) was to be seen quite frequently. This was called an ashpit midden and would have a mound of ashes and, if you were lucky, a trowel conveniently situated. If you were even more fortunate, this might be covered to guard the user from the elements and a familiar accessory of these was also the squares of newspaper available for purposes now mostly performed using Andrex etc. The successor to this would be the still common Septic Tank in outlying areas. None of the product would be wasted, being spread on the fields at the fertilizing season.

Part of the small community at Calke is served by a Reed Bed System in which a limited amount of effluent can be successfully neutralized by passing it through the root system of the reed bed.

Private houses would, however, still be served by the single bucket system, the contents of which, again, would be buried in the garden when necessary. Some might still use the method used in medieval castles, abbeys and priories. When you visit one next time observe that the privy is always downstream from the buildings. Too bad for those even further downstream!

Perhaps I might be allowed, at this stage, to mention the other services we now take for granted. Electricity, for example. This did not appear in the village, albeit hesitantly, until 1939. Perhaps the war delayed progress but it was also a fact that many people in the village, although their houses were connected, confined its use to the ground floor. One of the last to be connected was Scaddows Cottage, on the Harthshorne Road, which was not included until 1949. Electricity did not reach Calke village and Calke Abbey until 1962.

And then there was gas. A mains gas supply did not arrive in the village until 1952/3. This came, first, from Melbourne, as far as the central road junction, and then, later, through EMGAS, to the rest. Small wonder that, prior to this, a local nickname for Ticknall was ‘Paraffin City’.

Back to Water, mains supply did not come to the Village and to Home Farm until 1963 and, as for Calke Abbey, that had to wait until the arrival of the NT in 1985!

Bearing all this in mind, when you next fill a kettle and switch on the power to boil it for that cup of tea, as they say in Yorkshire “think on”, not least when, later, you have disposed of the results of that cup of tea and pulled the chain or pressed the button.