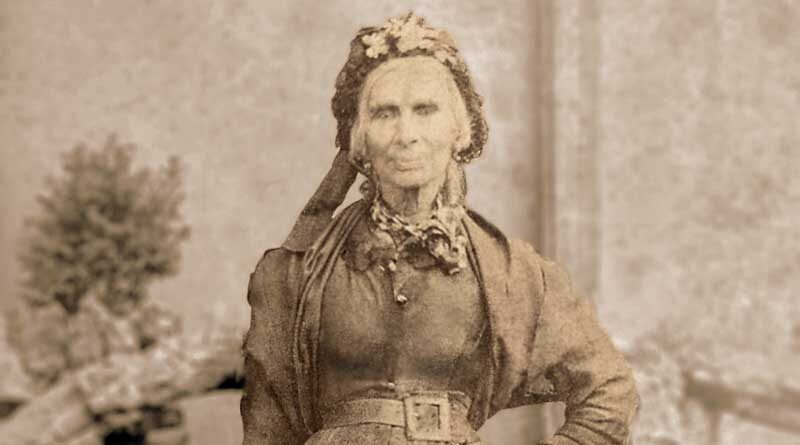 Delilah (known as Dellie) Boswell was born in Wheldon, Northants, in 1800, a member of the well-known Boswell gypsy family.

The family were allowed to camp in Calke Park – a rare privilege at a time when the Calke Abbey Estate was a very private place – and were welcome visitors to the Abbey.

Delilah was a ‘close pegg hawker’ (sic). She was taken to be photographed by David Trevor, photographer and picture frame maker, 1 and 2 Cattle Market, Ashby de la Zouch.

Towards the end of her life she lived on Stanton Lane, Ticknall.

Delilah died in 1885 and is buried in Ticknall Churchyard, along with another member of the Boswell family – Uriah, born 1826, died 1883.

The graves, marked by two Celtic iron crosses, were maintained by the Harpur Crewe Estate maintenance staff and were painted red and green.

The image, courtesy Harold Soar, is from an original photo that was in the possession of Frederick William Soar, 1848 – 1923, and was passed down through the family.

Fascinating to find Annette Soar’s story about Dellie Boswell, and the photograph, which was taken by my great-great-grandfather David Trevor (1828 – 1916) at his studio in Ashby de la Zouche. In addition to being an early photographer, David was also a professional musician, ventriloquist, magician and Punch and Judy man who toured England and Wales from 1850, and was still performing in his 80s, until his death in 1916. His stage name was Signor (or Professor ) Trevori and it’s possible you might see his name on ephemera relating to local shows, garden fetes, fairs etc. in the late 19th century. David’s only son Harry took over the photography business in Ashby until the early 1930s.