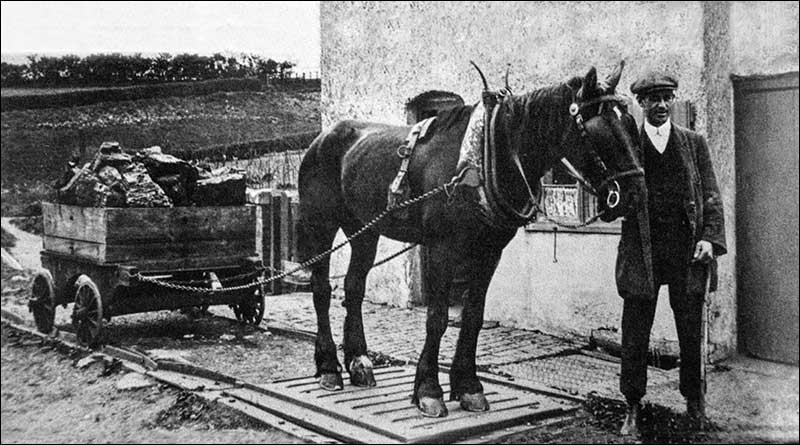 The Ticknall Tramway was a primitive form of horse tramway which was born in the Canal Age and survived long into the Railway Age. For a distance of 8 miles, the Ticknall tramway wound its way through the rural areas of North Leicestershire and South Derbyshire. As much of this area is woodland or pasture, many remains of the passage of the tramway survive to the present day, unlike other pioneering tram roads in industrial areas, which have mostly disappeared.

This article is taken from the booklet “The Ticknall Tramway” first published in 1992 by The Ticknall Preservation and Historical Society and is reproduced here (with minor revisions) with their kind permission. For a full list of contributors please see “Acknowledgements” at the end of the article.

A full list of TPHS publications and a mail order form is available here.

Foreword by Howard Usher to the original publication.

Geoffrey Ogden Holt (1910-1984) was a founder member and first treasurer of the Railway and Canal Historical Society. His working life was spent on the railways from 1929 when he joined the London Midland and Scottish Railway. He became District Traffic Inspector at Penrith and moved to Derby in 1954 as a lecturer in the School of Transport and later he worked in the Line Manager’s Office. He was a well-known railway historian and was commissioned to write Volume 10 (North-West Region) of the Regional Histories of the Railways of Great Britain, which was published by David Charles.

Geoffrey had agreed to give a talk on the Ticknall Tramway to the Ticknall Mothers’ Union on the 7th February 1984, but owing to ill health, he was unable to do so. So he prepared a manuscript for his wife, Margaret, to deliver in his stead.

This manuscript has been presented by Mrs Margaret Holt to the Ticknall Preservation & Historical Society, who decided to publish it, completely unabridged, just as Geoffrey wrote it.

By permission of the County Record Office, we are including a copy of the original proposals of Benjamin Outram when he was asked to consider the feasibility of a tramway from the Ashby Canal to the Ticknall Limeyards. Notes on the Breedon proposed Railway, the Little Eaton tramroad and the Coleorton Railway have been added.

Should you look at a Derbyshire guide book to see what it has to say about Ticknall, it is likely to say a little about the church, but will probably make no mention of a feature that I suppose everyone notices as he passes through – the Archway over the road at the end of the village. I am sure you all know a great deal about it and how it came to be there but perhaps it would interest you to hear something about the purposes for which it was made and the people who built it. The arch has now stood for over 180 years (217 years in 2019 – Ed.) and the developments which led to its construction go back to an even earlier time, when a Navigation Company, which owned boats on the upper part of the Trent, had ideas of linking themselves up with a supply of coal around Ashby Woulds. There were, indeed, ideas of building a canal all the way from Burton to join the Coventry Canal at a place called Marston Jabbett in Warwickshire – this was about 1780, but it all came to nothing.

A possible link with the Trent was considered again in 1787, when an engineer reported on making some sort of communication between the Earl of Stamford’s lime-works at Breedon and the river – he suggested a mile of tramroad to be worked by horse-drawn wagons and then 1 1/2 miles of canal leading into the Trent, but again nothing happened.

Then, in August 1792, a meeting was held at Ashby-de-la-Zouch and those present were in favour of making a canal from the limeworks at Ticknall to Ashby Woulds and there it was to continue until it joined the Coventry Canal at Griff, near Nuneaton. Those who supported the scheme included the Earl of Stamford, who owned the limeworks at Cloud Hill and Breedon, Earl Ferrers, who owned a limeworks at Staunton Harold, Francis Burdett of Foremark, Edward Dawson of Long Whatton and Thomas Pares who was a Leicester attorney. Lord Rawdon, who later became the Earl of Moira and then Marquis of Hastings, also supported the project but said that he would take no active part unless the Honourable Penn Assheton Curzon of Gopsall House, a landowner and one of the members for Leicestershire, also agreed. Curzon had no objection as long as the canal did not interfere with a plan he had for extending his park.

An engineer by the name of Robert Whitworth prepared a plan for a level canal without locks, from Griff all the way to Ashby Woulds where there were to be branch canals to Ticknall, to Coleorton collieries, and Cloud Hill, and also, if necessary, to Staunton Harold. The cutting of a canal from the Coventry Canal to Ashby Woulds began in 1794, over a distance of about 30 miles. After two years work, it was clear that the cost of this was going to work out at about £100,000, which was about four times as much as Robert Whitworth had estimated. It was in the light of this that the company decided that, if the landowners were agreeable, they would substitute tramroads for the canals to Ticknall and Cloud Hill.