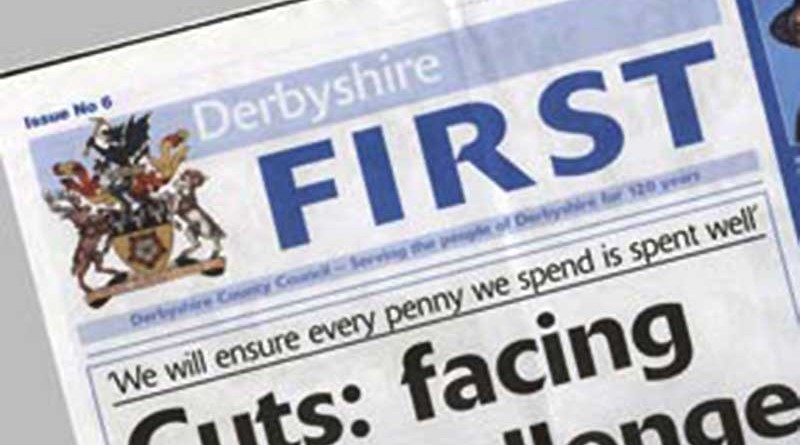 Today I received a “free” newspaper with the “Derbyshire FIRST” masthead. Yes, that’s it in the picture. I say “free” in quotes because I quickly realised that it was my money (and yours) that was being used to produce it. And think, ‘produce’ means not just writing the content, taking the pictures, creating the layout, printing and distributing the paper.

Nor is it just about the trees that were sacrificed to make the paper that it was printed on.

It is also about all the salaries and privileged pension provisions for all the people involved – and their bosses. And all the meetings and discussions and the political lobbying about what should be included. And the cost of the office space that they all occupy.

And for what purpose? To enable Derbyshire County Council to tell me (and you, perhaps – if you can be bothered to read it) about all the pet projects that they are spending even more of my money on.

How stupid is that? An own goal if ever there was one.

If I had been squandering other people’s hard-earned money on my favourite projects I would be so ashamed that I would want to keep it secret, not spend more of their money telling them about it.

The result of this expensive exercise (16 pages of it) will surely be that more and more people will have their attention drawn to the massive expenditure of their own money by people who think they know better than them what their money should be spent on.

Most ordinary straight thinking folks are going to be saying to themselves “Hey, just a minute – I’ve got a pretty good idea of how to squander my own money, thank you. I don’t need to pay through the nose for someone else to squander it for me!”

But it doesn’t end there.

The front-page story is ‘Cuts: facing the challenge’. (Yes, that’s their lower case ‘f’, not mine – that’s what you get for your money.) Lots of vague stuff about how they are going to address the need for more efficiency with renewed vigour. No mention of what will be cut to achieve the widely trailed 25% cuts in the public sector that the new coalition government is promising. The article claims that the “latest round of cuts” will cost £4 million and then goes on to admit that the budget is already overspent by £6 million, even without the “latest round of cuts”.

You might think this angers me. Well, perhaps just a little.

But I am not just a bit miffed – I am also confused; Councillor Andrew Lewer reminds us in a separate article on the front page that the County’s efforts to save money have resulted in an increase in Council tax of 1.5%.

Can someone explain to me how, after two years of recession which has inflicted serious financial pain on most people in the private sector as well as others on fixed incomes such as pensioners, the most stringent (swingeing, some say) cuts in peacetime equate to an INCREASE in Council Tax?