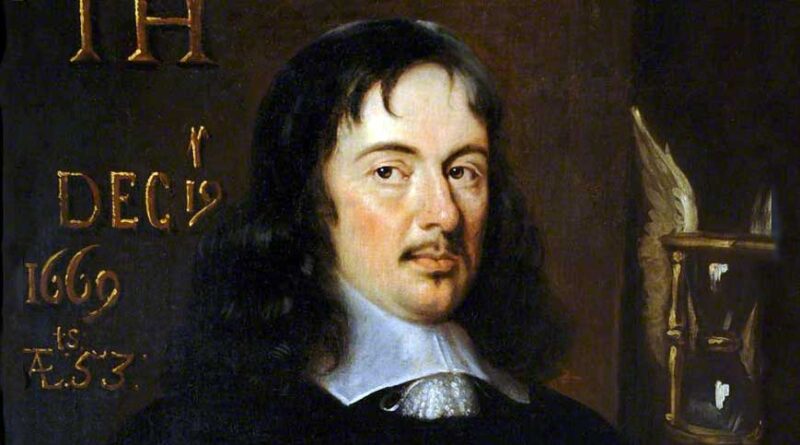 Of the 2nd baronet, who was born in 1616, we know very little, apart from the fact that, after the specific bequests made by his father, he did not inherit a great deal and that he had had 11 children!

A post-mortem portrait of him hangs on the north wall of the saloon in Calke Abbey. It shows an austere man, yet carries a number of symbols that tell their own story. His initials and date of death are in the top left-hand corner whilst, on the right, is an hourglass with wings to signify the passing of time. At the foot of the picture, his hand, holding a glove, rests on a skull, which is behind a watch. Both the gloves and the watch are indications of high standing since both were rare and expensive at the time. The Portrait would have been carried in the funeral and hung in the church, a custom which was, later, superseded by the ‘hatchment’ (achievement of arms).

He inherited the title in 1639, at the age of 23, so entering the last few years before the English Civil War. Thus, it was that being appointed *High Sheriff in 1641, he had the onerous task of collecting the ‘Ship Money’, a tax that was a remnant of the Plantagenet era when it was decreed that coastal towns and counties should supply ships to protect the coast, or the money wherewith to supply them. Charles I decided to extend this tax to cover all the country, and this decision played a large part in the unrest that led to that conflict.

He was a Royalist sympathiser and, although he came through the civil war with his estates entire, he was fined by the Parliamentarians, as was his relative at Littleover.

The records show that his wife was ‘Susan West, of London’. More than that we do not know. I did wonder if she was a ‘West’ who went on to become the ‘Sackville West’ family, but I can find no trace of a Susan at that time, even in the Baronogium Genealogicum and, believe me, that’s a weighty bedtime read!

He was made a Deputy Lieutenant (DL) of the county in 1661, and died in 1669, by now a rich man. The estate passed to his son, John, who thereby, became Sir John, the third baronet.

*It is interesting to note that, up to the year 2000, the Harpurs provided more High Sheriffs than any other family in the County. They numbered 15, with the nearest challenger the Cavendish family of Chatsworth (9).  Charles Harpur-Crewe and Henry Harpur-Crewe, later, also served.