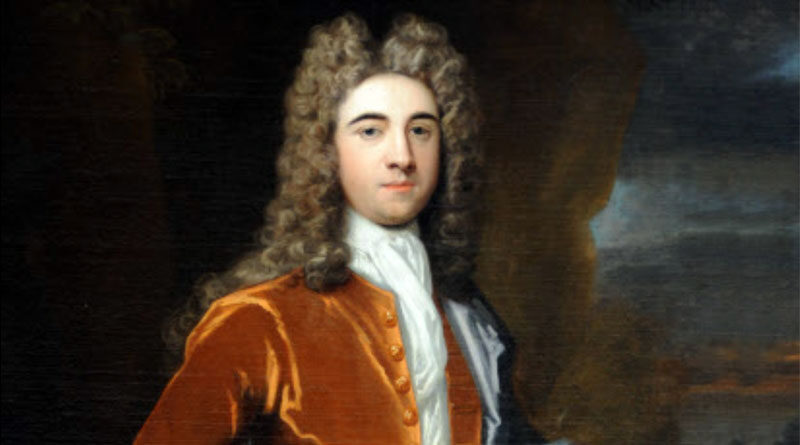 Although, by 1701, the Harpurs of Calke had held the title of Baronet for 75 years, it was not until John – at this time there was little imagination with first names – Harpur, 4th. Baronet, came of age that they, really, had the money to back it up.

John was born in 1680. His father died in 1681, at the age of 36, leaving his fifteen-month-old son to inherit. Until John was 21, his affairs were very well administered by his relative, John Harpur of Twyford, so that, when he came of age in 1701 – with bells ringing in 21 churches and wild rejoicing over most of South Derbyshire – from Burton-upon-Trent in the west to Hemington in the east and from Breadsall in the North to Smisby in the south – he was a very rich man.

One of the first things he did was to remodel Calke Abbey. He did not, as so many others had done, build a new house (Sudbury, Chatsworth, Hardwick etc) but altered the old one on the same footprint. In simplistic terms, he took the ‘C’ shaped building, – north wing, with shorter west and east wings the ends of which were joined by railings with a gatehouse in the centre – and joined the wings with what is now the imposing south front, albeit, then, a flat thirteen bay front, with pavilions, which completed a somewhat unbalanced building due to the lie if the land. Internally, he built two magnificent staircases in the space between the gatehouse and the two wings.

Thus, he now had a house where he could show off his wealth and he had made a good marriage with the youngest daughter of the 2nd. Baron Crewe of Steane, in Northamptonshire, Catherine, who brought with her a dowry of £12,000 (£2,500,000*)

In 1712 he built, slightly uphill from the house, the Stable Block, an imposing block built round a central courtyard, with two large entrance gates, north and south, to allow the passage of carriages, and, in 1728 contracted with James Gibb, the architect, who was in Derby at the time, working on what is now Derby Cathedral, to build him a flight of stone steps to the first floor, into the Saloon.

Although he had fulfilled the office of High Sherriff of Derbyshire in 1702, which cost him about £1,530 (£365,000*^), he was, also, put up for High Sheriff of Staffordshire om two occasions but managed to avoid them. John took little notice of public office, declining to stand for Parliament and preferring to go his own way at his own pace.

^The post of High Sheriff differed a great deal from that which it is today. A lot of the duties for which he was responsible were changed by the act of 1887. Before that, much that went on, from the Assizes, treatment of prisoners, meals, accommodation for the Judges etc., The High Sheriffs Banquet, and many other costs and obligations came out of the pocket of the incumbent. It was an honour that was looked upon with dubious pride!

One of the problems in research is that it is so easy to get side-tracked by things that are not germane to the main thrust of the article, yet have much interest in their own right.

26, St. James’s Place was built by three craftsmen in around 1692. It was occupied by a Francis Parry whose son, in March 1706, sold the house to Sir John Harpur who used it until his death in 1742. In 1745 his successors sold it to Lieut-General Sir John Cope. Cope was in charge of the English forces at Prestonpans who were routed by the Scots. This is still commemorated by a Scots folk song ‘Hey! Johnny Cope are ye wauking yet’, a pipe version of which serves as a reveille in Scots Regiments.  Cope lived in the house until his death in 1760.

Then came Richard Rigby, described in his time, as a bon vivant of the first order and a statesman of the second, Richard Vernon, ‘alias the fox alias Jubilee Dicky’, MP and a founder of the Jockey Club.

Then came Robert Smith, 1st Lord Carrington. He was a friend of Pitt and, also, had plantations in Jamaica. He bought, in 1798, and rebuilt, Loakes House, nr High Wycombe, and renamed it Wycombe Abbey. It is now an independent girls’ school.

Almost all of these occupants of No. 26 altered, extended or enlarged it so that its appearance reflected the times in which they lived. However, in WWII it was destroyed in a bombing raid and was not rebuilt until 1959.