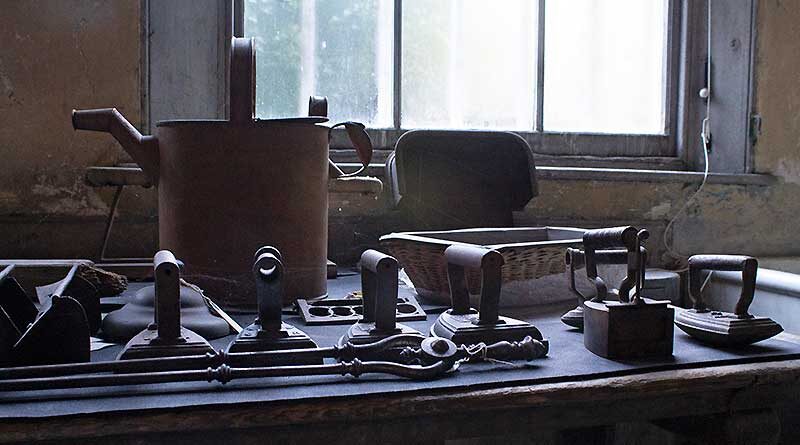 People had very fixed ideas about women who did laundry work. ‘It was a low technology and a low skill activity requiring hard physical labour rather than dexterity or technical ability’[1] And after all any woman could do laundry.

Along with the position of scullery maid, the 3rd or 4th laundry maid tended to be a good first ‘place’ for a young girl. They were given the most menial tasks such as lighting the boiler fires in the early morning ready to heat the water and were trained (starting with the cleaning cloths for example, and then napkins,) how to launder all the various linens and clothes, including stain removal, pressing and folding. The Head Laundry maid would be skilled in stain removal and how to wash different items. She usually had responsibility for laundering the family’s clothing.

Coal fires, candles, oil lamps and general pollution contributed to the need for a great deal of washing and whereas in modest households washing day was  Monday, in larger houses it was every day, except Sunday.

On an Estate like Calke, the Laundry was normally a separate building and indeed, the Wet Laundry (where understandably all the washing was done) is at the back of the house on the North side. Near this was the ‘Drying Ground’ where everything was hung or draped to dry. Very close by, but inside the house is the Dry Laundry, where a huge drying rack hung from the ceiling, a long table for ironing ran along one side of the room, and a fireplace where the irons would be heated. Off to the side of this room were steps up to a door which led to the laundry maid’s bedroom.

The separateness of the laundry to the rest of the house fuelled stories that laundry maids were subversive and ‘up to no good’, because it was easily accessible to outside workers, such as Grooms and Gardeners for example. It was also more difficult for the Housekeeper to keep an eye on her laundry girls, so they got a certain reputation, whether deserved or not, of being of a loose moral character.

Laundrymaid Amy Wakelin met and married one of the gardeners at Calke in 1897. Because of the strict moral code discouraging servants from fraternising with one another, they would have kept their relationship very quiet. Amy was born in Bucknell, Oxfordshire in 1869[2] and probably went into service (like at least 3 of her siblings) very early. Their father, Thomas was an agricultural labourer, which was poorly paid and in most cases, seasonal so the children would be expected to go out to work at a very young age and contribute most of their wages to the household.

In 1891, aged 21 Amy was Laundry Maid at Swinfen Hall, Staffordshire[3] and came to Calke sometime after that. Even though she was far from home she would still be sending a proportion of her wages to her parents.

Margaret, Amy’s granddaughter recounted some of her grandmother’s memories of working at Calke. ‘It was very cold in the house and working in the Laundry all day in hot and cold water, she always had red and chapped hands. No electric, so they found their way around at night using candles or Paraffin lamps. They were expected to go to Church every Sunday, no excuses.’[4]

Amy married Charles Wood back in Bucknell in 1897[5], and of course, she then left service to look after her own home. She and Charles moved into one of the ‘Stone Front’ houses on Main Street, Ticknall which have distinctive diamond-paned windows.[6]

It may have been said that ‘any woman could wash clothes’, but actually in a large household like Calke,  the range of linen, fabric and clothes could be extensive and each needed to be treated in a particular way and the success of ‘the wash’ depended on the skill of the laundrymaid. Washing needed to be divided into separate piles according to the fineness of the linen and colour. Stain removal first, then dirtiest parts rubbed with soap and everything soaked overnight with a soap powder. The copper would be lit early in the morning, soaked clothes rung out and boiled for 20-30  minutes. As each item is taken out it is dipped in cold water, wrung, rinsed and ‘blued’(usually Indigo which gave whites a tinge of blue). But the real skill came when starching, folding and ironing.[7]

At Calke we have a Box Mangle, not, as you might expect, for squeezing the last remnants of water out of linen, but for ironing large items like tablecloths and bed linen. It’s complicated to describe in words how it worked, but basically, it involved the linen rolled around wooden rollers placed underneath a box filled with rocks and rolled backwards and forwards. Really skilled Laundrymaids could also add smaller, carefully placed items to save time when ironing. It could be hard, physical work.

Someone who would have been used to hard work came to be Laundrymaid at Calke in 1900. Ellen Smith had one of the saddest stories I have researched, but ultimately with a happy ending.

Ellen was born in 1875 in Clifton upon Teme, Worcs.[8] Her father,  Samuel was a Carrier which meant he drove a horse and cart carrying goods around the area. Ellen had 10 siblings. When she was only 4 years old both her parents died within weeks of each other, leaving 7 of their children under the age of 13. The youngest, John was only 2 years old. I think they all went to live with their grandmother Sarah Green.[9] She was 77 so this was quite a task to take on. Unsurprisingly, Sarah died 3 years later and the children were scattered. The ones old enough to work found places where they could live-in. John went to an orphanage, her sister Edith ended up in an Industrial School. I think perhaps Ellen was also sent there but in 1891 aged 16 years, she was working as a Laundrymaid in Oldham, Lancs.[10]

In 1901 both Ellen and Edith were at Calke; Ellen in the Laundry and Edith as a housemaid.[11] It must have been so good to be together. Ellen’s character reference came from Mrs Moussey at East Court House, Malmesbury, her previous employer. She only stayed a year, leaving Calke on June 8th, 1901, with Edith following her in 1902.[12]

In the 1911 Census, Ellen was in St James Place, Westminster working for Lady Sarah Spencer as Housekeeper, in charge of 10 live-in servants.[13] A happy ending to a tough start in life.