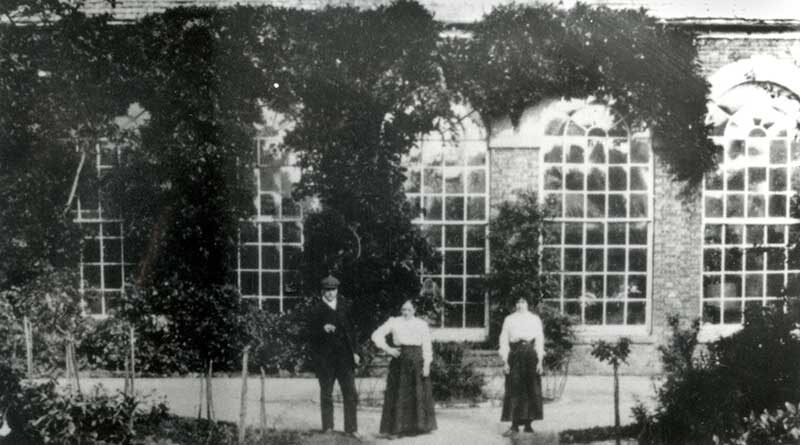 The gardens and landscaping at Calke have changed over the years according to fashion, and the tastes and needs of each Baronet. The large, very formal gardens at the East Front of the house were lost to fashionable naturalistic landscaping before the Victorian era and the ‘Hanging Gardens’ between the house and the church were swept away before the end of the 18th century.

These beautiful gardens at Calke Abbey did not look after themselves. Even today it takes very skilled gardeners, some apprentices, and a small army of volunteers to maintain these, both as a thing of beauty and for the practical purpose of providing produce for the visitors to buy.  In the past, of course, the gardens were even more labour intensive without the benefit of the tools and technology we have today. The responsibility for the gardens in establishments like Calke Abbey fell on the shoulders of the Head Gardener.

The Head Gardener ranked, professionally, alongside the Butler, but was usually paid less. However, Calke bucked the trend here, and certainly, in Victorian times, the head gardener was the highest-paid servant. Typically, he was paid £60 per year, and the Butler £50. He would be well qualified, coming up through the ranks of Garden boy, Gardener, and Under Gardener, studying in his own time and at his own expense. He might have a ‘specialism’, something which he is passionate about, such as alpines, roses, or exotic fruit such as Pineapples. (Pineapples were grown at Calke).

As well as being good at gardening he needed other skills too. He needed to manage a large team of gardeners, organising their works and checking their standards. He was also in charge of, and expected to manage, a large budget.[1] At Calke the House Steward managed the servant’s wages, but the garden staff were paid by the Head gardener out of his ‘budget.’

George Lee had a typical rise through the ranks. Born in 1831 in Leatherhead, Surrey,[2] he had a good start as his father John was Head Gardener at Hitcham Gardens in 1851, and George, at 19 years old, was working there with him as a Gardener,[3] no doubt starting at an early age as a garden boy, learning his craft from his father. His brother Charles was also a Gardener spending most of his career at Boconnoc Gardens in Cornwall.

After marriage to Louise Sedwell, he was a gardener for a spell at Westbrook Hay, the estate of Tory MP, Granville Ryder, where his first two children were born. He came to Calke in October 1860 as head Gardener. As usual at Calke he was the highest-paid servant, earning £60 per year. Several entries in the Stewards Account books refer to him between 1860 and 1867. A typical entry is the following, where George would be paid the money to pay his labourers. From July 1862.[4]

He needed to have a good working relationship with the Cook (Mary Poundall in 1866) so that the kitchen could be provided with fresh produce all year round. And the Housekeeper (Harriett Phillips) would have required fresh flowers for arrangements in the house.

As well as being practical, he also needed to be artistic in order to show off the flower gardens to their best advantage.[5] The ladies of the house could take a great interest in the gardens. Lady Georgiana, Sir John the 10th Baronets wife, was  passionate about the horticulture and Hilda loved her rose garden.

George and Louisa had 3 more children while at Calke[6] and then George left about 1867 and got the Head Gardeners position at Vinter’s House in Boxley, Kent.[7] Sadly life took a tragic turn for George and the family. Louisa was admitted to a Lunatic Asylum and spent the next 30 years there until her death in 1901.[8] George himself died in 1872, leaving 5 children between the ages of 5 and 13.[9]

We cannot be sure exactly how many men worked in the gardens at any one time, but it was possibly about 9-11 garden labourers plus the Head Gardener. A small proportion of these would be women, sometimes described as ‘weeder women’, but their tasks weren’t specified at Calke.

So where did they all live? Well, the Head Gardener was given a house in Calke, but it is unsure exactly which one it was. The Under Gardener, if not married, and other young gardeners would sleep on site. At Calke it would have been in the ‘Garden House’. (Called the Bothy in other establishments) It was very basic accommodation, but we have little idea of what it consisted of. Were the beds upstairs? Bunk beds that are now shelves to store the apples? Meals would be provided, but these would not be taken at the House with the other servants; it was too far to walk, taking valuable time out of their working day. Calke had a Garden Woman. In the 1850’s this was Elizabeth Topliss.[10] She was married to Francis, an Estate Agricultural Labourer and they had 3 children. In the 1851 Census, they were living in Calke Village. Elizabeth’s job would have been as a sort of housekeeper for the young gardeners living in. She would provide maybe breakfast and lunchtime meals, generally keep the Bothy clean and tidy, and launder bedding and household linen. Elizabeth was almost like a mother to these young men who, for the most part, were far from home.[11]

The Garden Labourers tended to be local men who came every day from Ticknall or Calke. One of these was George Sylvester. He was born in 1844 in Elford near Tamworth[12] and spent most of his life in service in the stables as groom and Coachman in various country houses. He came to Calke when he was in his 50’s. He and his wife Hannah moved into Heath End Lodge and in the 1901 Census he described himself as Garden and Domestic Labourer.[13] He would have spent most of his time on the tough, manual side of the garden including lots of digging, planting, pruning, weeding, turning manure, etc., under the directions of the Head Gardener. You would perhaps nowadays be surprised at a man in his late 50’s still carrying out such a tough, physical job, but if you were fairly fit it wasn’t unusual to find men in their 70’s still working as Garden Labourers. Remember too that there was no old-age pension in those days. If you didn’t work you couldn’t look after yourself or your family.

George and Hannah also acted as Lodgekeepers, which gave them an income on top of George’s wages and also provided them with somewhere to live. Hannah died in 1925 leaving George a widower. They didn’t have any children so there was no one to look after George. The family at Calke obviously thought a lot of George as they allowed him to stay on at Heath End Lodge, with Lady Isobel finding him a housekeeper to look after him.[14] He died there in 1939 aged 95.[15]

Thanks to Heloise Brooke, Head Gardener at Calke, for her valuable contribution to this article.