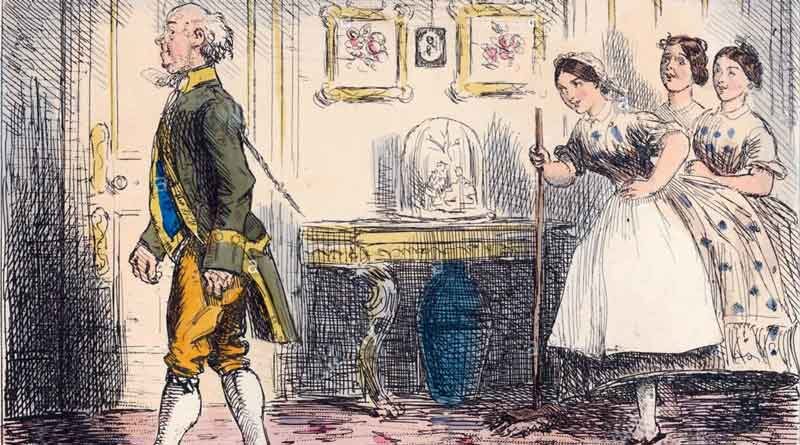 The peacocks among domestics, footmen were blatantly employed for their good looks and suave manners. It even went so far as you received a higher wage the taller you were. In the Calke Archive, the application letters from prospective footmen are the only ones that include their height. William Bown, a footman in 1850 earned £24 per year, while his equal, William Bennett only earned £20 and although their heights are not recorded I suspect Bown was the taller of the two.[1] 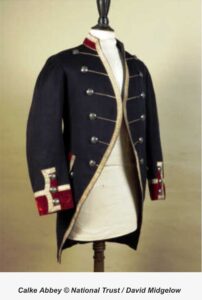 They were an expensive luxury that the gentry felt they had to pay for, to keep up appearances. From 1770 to 1930 they had to pay a tax for every manservant they had from Grooms to Butlers[2]. Footmen were also dressed in ‘Livery’, the uniform of the house if you like. The photograph is an example of a ‘best suit’ coat from the  Calke Livery in the 19th century.

It was a very expensive business. A livery book from the 1840s exists in the Calke Archive and it contains the livery bought for footmen, grooms, coachmen etc. A typical list of purchases for Alfred Martin from 1848 cost £27.12.3 (the equivalent today of £2000.) The best suit alone would have cost £500 today. The bill was for April and September that year.[3]

Footmen tended to be called by their first names, as opposed to the Butler who was always referred to by his surname. However, their master’s were known to change their names, sometimes for the sensible reason that they already had a footman with that name, but sometimes, because they called all their successive footmen by the same name – presumably so they never forgot it.

Another letter of application demonstrates this. Henry East was applying for a footman’s place at Calke. At the end of his letter, he added ‘Captain used to call me James.’ And sure enough, the enclosed reference from the Captain started ‘James East…….’.[4]

If a footman intended to stay in service, the ultimate ambition was to find a position as Butler, and his career was spent learning all there was to know about running a household.

William Daff (or Billy as he was known) is a good example of the career ladder of a footman, which all took place at Calke. Unusual in itself as it was a fairly rare occurrence to be promoted ‘in house’. William was born in Theddlethorpe, Lincs (nr Mablethorpe) in 1892 and with the surname ‘Daft’.[5] He was at Calke by at least 1910, as he appears on the servant’s photograph from that year.[6] In the 1911 Census, he called himself William Daff and his role was that of Hall Boy. This was the first rung of the ladder for a male house servant. The role was called Hall Boy because he spent a lot of time in the servant’s hall learning the ropes by serving the servants at mealtimes, keeping the servant’s hall clean and tidy and cleaning all the servant’s shoes, as well as doing any other jobs required of him.

He obviously made a good impression as he was promoted to Footman. His duties now would have been to lay the table for all meals – a very exacting business involving rulers, – and to wait at table. Footmen did spend a lot of time ‘waiting’, sometimes called ‘close waiting’, in proximity to members of the family in case they were needed for some task or other. A good proportion of their time was spent cleaning too. Under the supervision and training of the Butler, they cleaned all the silver, with bare hands using a soft, red powder called ‘rouge’ mixed with ammonia. This caustic mixture, over time, gave them ‘plate hands’ (ugly and calloused) which is why they wore white gloves when serving at table.[7]

William would also have done carriage duty, accompanying members of the family on various journeys, maybe to organise food and a place to sleep for everyone on the way. Calke didn’t employ valet’s (I have only found evidence of two) and footmen were expected to carry out that role for the male members of the family and any invited guests. In 1864, footman Joseph Watson accompanied Sir John and the family to Europe. There are no other male servants named on the ‘document of introduction’ (a necessary item when staying in hotels or family houses abroad) and so he would be expected to serve as valet as well as handling all the baggage.[8]

William left Calke in November 1914, along with 2 more young male servants.[9] They went almost straight to Derby to sign up for WWI. William joined the 22nd Battalion Royal Garrison as a Gunner. He served in France but was discharged in October 1916 as ‘no longer fit for service’.[10] At some point later he returned to Calke as Butler. We know this because Vauncey’s will in 1924 left £50 to ‘William Daff, Butler if he is still in my service’.[11] I would imagine Sir Vauncey, considering the difficulties of finding servants at that time, would have welcomed him back with open arms.

In 1939 he was Butler to Mrs Hilda Wills, the widow of a Barrister in Sodbury, Gloucestershire.[12] A smaller household by Calke’s standards. He returned to Lincolnshire in retirement and died in Grimsby in 1947.

Next article: The Stillroom Maid