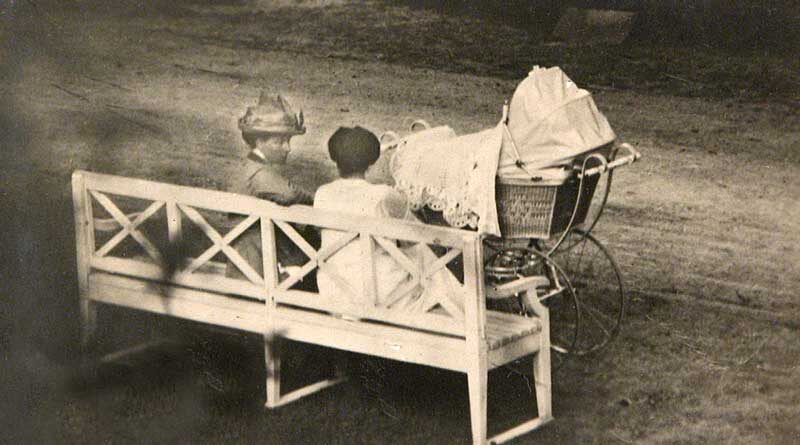 ‘Caring for the heir and the spare.’ In well-heeled families with small children, a nanny or nurse was an essential employee. It was a position of great trust and responsibility.[1] ‘Nurse’ was their official title (always described as this on the Census Returns for example), but informally by the family, and the children, they were called Nanny.

In polite society, it was not the ‘done thing’ to look after your own children. You employed a competent female to change nappies, feed and care for your offspring 24 hours a day and deal with frequent illnesses.[2]

One important task that was certainly discouraged was breastfeeding, and for that, the mother would employ a wet nurse. Usually, a young local woman, who had recently had their own child, would be paid to breastfeed the newborn baby. They would live in until their services were no longer required.[3]

Elizabeth Stinges was employed in 1805 for Nanny, by the wife of Henry 7th Bart at Calke, probably for their youngest son Charles. She stayed for 25 weeks and was paid £9.7s 6d.[4]

The Nursery staff were usually recruited from large farming families and began their career early as Nurserymaids, and could work their way up to Under Nurse and then Nurse/Nanny.

One such young girl started in this way at Calke and went on to have a long association with the family right into old age. Nursery servants formed strong attachments with their young charges, dealing with all their physical and emotional needs.[5] High society demanded that children saw little of their parents and so it was understandable that such closeness could develop between the child and their Nanny.

This was certainly true of Alice Pearse. Alice remained close to the Harpur Crewe’s from when she first came to Calke until she died. But let’s start at the beginning of this ladies fascinating story.

Alice was born in the East End of London in 1868[6] into a life of poverty. Her family were not unfamiliar with the workhouse at various times in their lives. Her maternal grandfather, Joseph Safe found life particularly hard, his first wife dying young leaving him with two very young children. In his old age, he was in and out of Raine Street workhouse in Tower Hamlets until he died there in 1886.[7]

Alice probably had no memory of her father as he died before she was 3 years old. She was living with her widowed mother in Mile End Old Town in 1871 with 4 older siblings. Her mother, Mary was working as a Laundress in order to care for her young family and keep a roof over their heads.[8]

In the 1881 Census, Alice is a Domestic Servant for John Davis, a Coffeehouse keeper in Bethnal Green.[9] He has 3 very young children so this could be the beginning of Alice’s Nursery career. She says she is 15, but really she is only 12 and given the circumstances of her family, it would be quite normal for girls to be sent into service at that young age.

By 1891 Alice was at Calke as Nursery Maid.[10] At first, she would have been waiting on the Senior Nursery staff such as Mary Ann Gilbert who was the Nurse then. The 5 children were aged from 13 to 3. Of course, the Governess would be in charge of the older children’s education, but the nursery staff looked after all their other needs 24 hours a day.

As the children grew older there was less need for Nursery staff and so by 1901, Alice had moved on, down to Kingsbridge in Devon.[11] She was then working as a Nurse/Nanny for James Twysden, a retired Navy Captain, with 5 young children, an ideal position for a now experienced Alice.

She was still with the Twyford family in 1911 but probably coming to the end of her time there as the children were older then.[12] Her youngest charge, Anne Evelyn was 12 years old. She had obviously built quite a bond with the children, especially Anne, as she kept in contact with them until her death. 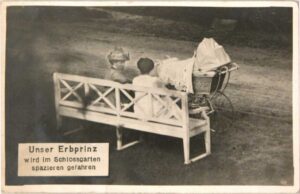 Alice then made a huge move both in status and distance. We have in the archives at Calke a postcard sent by Alice in April 1914 to the family. It is not signed, but other evidence points to it being from her. It is from Braunschweig, Germany and the photograph is of Alice, wearing a hat and another lady (the monthly nurse) seated on a bench with a very elaborate pram in front of them. The caption printed on the front translates as ‘The hereditary Prince out for a walk in the Palace Gardens.’ [13]The Prince is Ernest Augustus the eldest son of the Duke and Duchess of Brunswick, and the grandson of 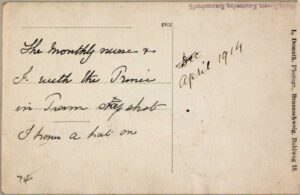 Emperor Wilhelm II (The Kaiser) It is the only photograph we have of Alice. She has written on the back ‘The monthly nurse and I with the Prince in Pram snapshot. I have a hat on.’ English Nanny’s were very highly regarded and the Duke and Duchess would have made a conscious decision to employ Alice because of her background.

Four months after this postcard was written the First World War started. However, despite the obvious problems this might cause, Alice does not immediately return home. In fact, evidence suggests that she does not return until 1916. An entry in Richard’s (Sir Vauncey’s son) diary for September 4th 1916 reads ‘Old nurse in childhood days, Pearse, came to see me, recently back from Germany – a fortnight – seems wonderful she was let go. Some interesting experiences, even in the nobleman’s house where food was cut down.’[14]

The following year Frances Jenney, the youngest of the children when Alice was at Calke, has her first child, Charles and it seems likely that Alice (still in contact with her) was employed as the Nurse/Nanny at their house in Bedford. She remained with the Jenney’s, looking after their three children until at least 1939. In the 1939 Register, she is described as ‘a maid’. The children are too old for a nanny, but Frances ( a widow now) keeps her on, changing her role. There is also another maid, Frances Stansell.[15] Frances is Alice’s niece, made an orphan at only 2 years old when Alice’s sister died. Alice made sure she looked after her nieces and nephews for the rest of her life.

By 1947 she was living at Calke and aged 79. This is not a working arrangement; the family have chosen to look after Alice in her old age. We know this from an account of a GP from Ashby who had been summoned to see ‘Miss Moseley’s Nanny’. The doctor suggested that the old lady be moved downstairs so that it would be easier to care for her, but Hilda said she would remain in her room that was familiar to her.

Her nieces Emily and Fanny (Frances) were regular visitors to Calke and indeed Ann Fellowes (the young girl from the family in Devon) also visited her old nanny, demonstrating what an impact Alice had on her young charges.

In 1961 we have an eyewitness account, as it were, to Nanny Pearse (as she was always known in the family) living at Calke; The Duchess of Devonshire visited for dinner in 1961. She wrote ‘After dinner Airmyne led the women guests back to the drawing-room, leaving the men to their port. ‘Would you like to see nanny?’ she whispered. I was flattered to be singled out for this honour and we set off up a magnificent flight of shallow, mahogany stairs, along a passage, and through a bedroom door. I could just make out a tiny, ancient creature, curled up fast asleep in bed. Airmyne roused her. One eye opened and she just managed, ‘Good evening.’ We left her in peace and as we trekked back to the drawing-room, Airmyne said, ‘She was the Kaiser’s Nanny.’[16]

The family paid for a nurse to come in from Hartshorne, Mrs Bloor. She would sleep in the Pink Dressing Room and sometimes on a couch in Nanny’s bedroom when her health deteriorated. [17] Lucy Pegg would also sometimes sleep on the couch when Mrs Bloor needed the night off.[18]

It wouldn’t be long after this that it got too difficult to look after her and so Nanny was moved from Calke into the NHS Cottage hospital, ‘The Grove’ at Shardlow. We have a charming postcard sent to ‘Nanny’ from Calke while she was at the Grove. It says simply ‘Calke. Friday. Everyone always sends love to darling Nanny. Lovely sun for oats, wheat, Barley. Much love from All.’[19]  She died there on 14th Sept 1964 aged 96.[20]

After her cremation, her remains were interred in Frances’s grave in Calke Churchyard.

In her will, she left £50 each to Charles, Henry, Airmyne and Anne Fellowes. The rest of her estate went to the children of her deceased sister.

Next article, The Gardener