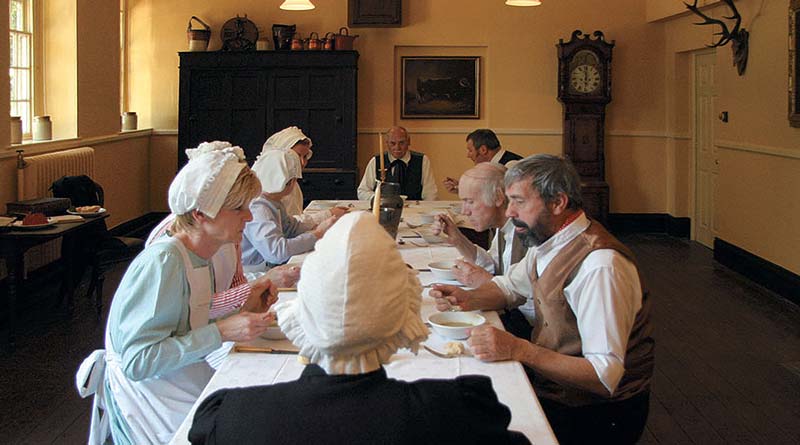 In Victorian times, if you chose a life of service you accepted a regular wage, hard work, and a place within a strict servant hierarchy. It was perhaps no different from a business model nowadays. Everyone knew their place and their position was reflected in their wages. The highest-paid servant at Calke was (and this was fairly unusual) the Head Gardener, (£60 per annum) followed closely by the Butler (£50 per annum) and then the Housekeeper. (£45 per annum). These three positions were at the top of the ‘servant ‘tree’.

The Head Gardener was, as you would expect, in charge of everything in the formal and kitchen gardens. This included the hiring and firing of his staff (there were, on average, eleven extra gardeners at Calke). The Steward’s Account books only ever mention the name of the Head Gardener and this is with regards to payment of bills and money for the wages of the other gardeners.

The Butler was the ‘Top Dog’ in the house, reflected in his salary. Directly answerable to the Master of the house and in charge of all the male servants in the house and the stables, although the Coachman saw to the day to day running of the carriages and horses. There were various male roles such as footman for example. Even this role had its own hierarchy – Under Butler, First, second, third etc. footman depending on the size of the establishment they worked for. Calke had three to four footmen and at various times a Porter and a Hall Boy, depending, I think, on the family’s needs or fortunes. Each level of Footman would be given a prescribed list of jobs and responsibilities depending on their experience, with jobs like trimming and lighting the lamps at the bottom end of the scale, to serving at dinner and acting as valet at the other end of the scale.

The Housekeeper was the highest-paid female servant and was responsible for all the day to day running of the household and for the discipline and moral welfare of the female servants. Although, the Ladies maids and the Governess tended to answer directly to the mistress of the house, rather than come directly under the jurisdiction of the housekeeper. Housemaids were most closely associated with the housekeeper and again the number of housemaids tended to depend on the size and finances of the house itself. Calke, in its heyday of the 18th and 19th Centuries, had four housemaids and like the footmen had their own hierarchy of head housemaid and 2nd, 3rd  and 4th with jobs allocated according to their rank and experience.

The kitchen, sculleries and pantries were the domain of the Cook. He/she was answerable to the Housekeeper, but like the coachman’s control of the stables, the Cook had responsibility for everything in the kitchen, including the kitchen maid and the scullery maid. The scullery maid was perhaps the lowest rank of female servant, often a starting place for a girl wanting to go into service. Washing up and cleaning was basically her job. As far as I can tell Calke only had one scullery maid and one kitchen maid, with temporary girls from the village brought in when needed.

The Laundry also came under the responsibilities of the Housekeeper, although the Head Laundry maid would be in charge of the day to day running of it. Calke generally had three to four laundry maids and jobs again were organised hierarchically from the head laundrymaid down to the 4th.

There was nowhere that demonstrated this hierarchy better than the servant’s hall at mealtimes. There was very strict observance of where each servant should sit. Although we have no written evidence of how this played out at Calke, in general, the Butler sat at one end of the table, and the Housekeeper at the other. The rest of the servants then sat in order of hierarchy down each side, the men on one side and the ladies on the other. The first footman, or under butler on the Butlers right and the Ladies Maid on his left. No one sits down before the Butler. Idle chit chat was not encouraged and in some households, the lower servants were not allowed to speak unless spoken to by an upper servant. Also, in some households once the Butler had finished eating, the plates were cleared away, so you learned to eat quickly. The Butler, Housekeeper and Ladies Maid would retire to the Housekeepers room for their ‘pudding’ and tea and coffee, which then gave the opportunity for the lower servants to chat and be less formal.

The Cook, kitchen maid and scullery maid would eat in the kitchen usually and the Governess, in the schoolroom.

Next article, The Butler