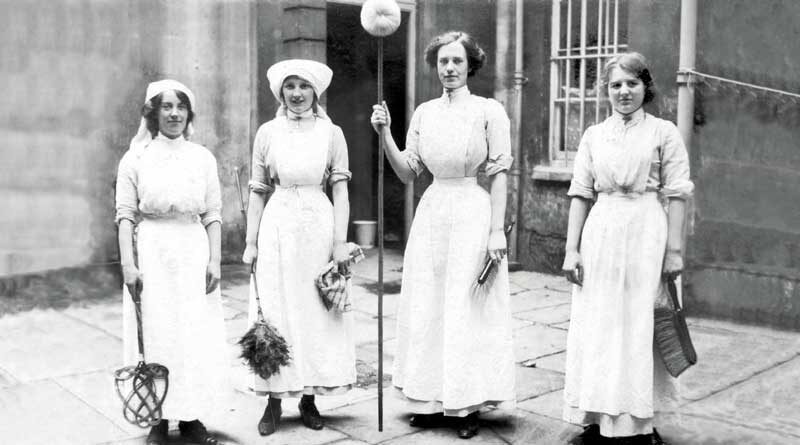 The Housemaid was ‘a foot soldier in the Victorian household’s constant war against grime.’[1] It tended to be a tough physical job more suited maybe to a fit young man, and not the 14-year old girls who started at the bottom rung of the service ladder, although a large, landed gentry house like Calke Abbey was more likely to employ a young woman who had already gained some experience in a smaller household, so tended to be a little older.

It seems that Calke needed 3 to 4 housemaids to keep the house in tip top condition and their lives would be governed by a strict routine. The Housekeeper would draw up a rota for the week which kept each housemaid busy all day. And it could be quite a complicated enterprise. You see, the mark of a good housemaid routine was for them to be invisible. They were expected to keep the house clean without any of the family or guests seeing them. So a typical day might be as follows:

And all this without being seen by any member of the family. It must have been a highly choreographed routine.

Sir Vauncey was famous for being very particular about the temperature in the rooms which housed his collections. Story’s exist of him sacking housemaids on the spot who either let the fires get too hot, or too cold. Although, the housemaid was usually told to ignore it and Vauncey was none the wiser.

I’ve found at Calke that Housemaids didn’t tend to stay very long, some less than a year. This could have been for several reasons. It was rare to gain promotion ‘in house’ so girls tended to move on to better themselves. The most popular reason for leaving was to marry. One housemaid at Calke was the exception to these rules.

Rebecca Horspool was born Rebecca Spring in 1797 in Burley, Rutland. In 1827 she married James Horspool at St George’s Church, Hanover Sq, Westminster.[3] A bit of speculation is needed here because of lack of records, but I am assuming that they were both in service in London at the time, as I believe James also came from Burley, as there are a lot of Horspools in the village.

Sadly, sometime between 1827 and 1850 James died as Rebecca was a widow when she came to Calke as Housemaid in 1850.[4] She also lied about her age. She was actually 55 years old when she applied for the job, but this might have been considered too old for a Housemaid so she told them the youngest age she thought she could get away with and that was 42. And here is where she is unusual; she remained at Calke for 15 years, rising to be Head Housemaid. Interestingly, she earned £15 per year when she started, and 15 years later she was still earning exactly the same amount.

In the 1861 census, she still was lying about her age but this time only reducing it by 9 years.[5] She left Calke in 1865 (almost 70 years old) and moved to Southwell, Notts. The family paid for her travel expenses and luggage. For 2 years after that, the family paid her a half-yearly gratuity of £6.12s, almost the same as her wages at Calke.[6] She died in Southwell in 1870 aged 73, still knocking a few years off.

Housemaids were rarely local girls. You had to mind your own business and keep your mouths shut. Don’t converse with anyone much in the village. The family didn’t want things the housemaids had overheard or were aware of, being repeated to the locals. But where Calke was concerned, a young lady called Hannah Hudson was an exception.

A long line of Hudsons were gamekeepers for the Estate and Hannah was born at Wicket Nook, near Smisby. Her father John was a gamekeeper. In the 1851 census, she was there with her parents, 3 of her siblings and her grandmother, Martha.[7] Her mother Caroline recalled that she and John would go into Ashby on shopping trips, leaving a black retriever dog in charge of the cottage – to keep the children in and intruders out.[8]

In 1858 they moved to another Keepers Cottage known as the Whimsey on the edge of Calke Park, near Middle Lodge. Here Hannah and her sisters were closer to Lady Crewe’s school which they had been attending since they were small. The school was built in 1822 by Sir George as a school for 40 girls, at a time when girls education was not considered important. Lady Crewe chose the pupils herself, usually from the daughters of employees on the Estate. It was considered a privilege to attend.

But then in 1860, the gamekeeper at Twyford died and Sir John asked the Hudsons to take over and so the whole family moved to Twyford.[9]

In 1871 Hannah was living at Calke as a Housemaid. She was obviously known by the family and thought trustworthy and discreet. However, she was ambitious and moved on to Clitheroe, Lancs to serve as Cook for the Rev Waddington.[10] Her Calke connections helped her to gain her next post, that of nurserymaid to the young family of the Rev William Purchas in Alstonefield. The Rev Purchas had lived at Calke and been tutor to a young Vauncey. Sir John had given him the living at Alstonefield when it became available. Hannah was to spend the rest of her life with the family as Cook, then Housekeeper for his son Arthur, also in Religious Orders.

She spent the last years of her life in Tissington, close to friends she had made there and she died in 1916. She was brought home to Twyford for burial.[11]

Next article: The Groom