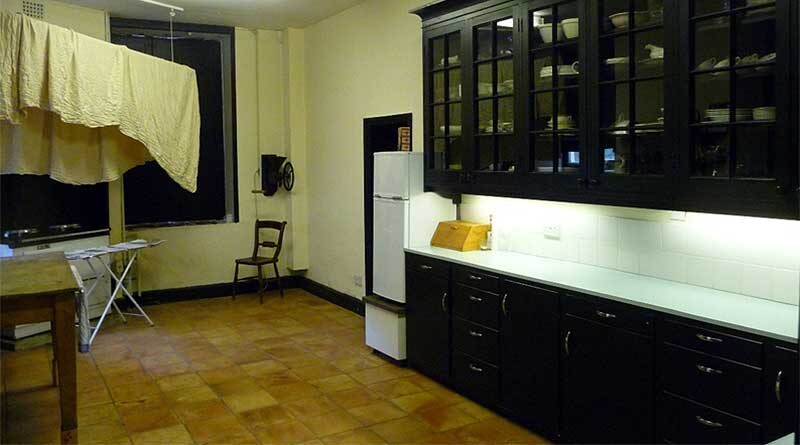 The Stillroom in a large country house gets its name from its original use as a place where medicines and scents were distilled.[1] Indeed in the Calke Archive there is a medicinal recipe book from the 18th Century, hand written, which the Stillroom maid would have to follow including oils, potions and herbal remedies. In this capacity she would have answered to the Housekeeper, and in some cases even the Mistress directly.

Later on in the 19th Century the role had expanded to the making of coffee, jams, preserves and pickles and even fancy breads and cakes, now under the jurisdiction of the Cook.

Abra Storr was born in Frodlingham, Lincs in 1831. She was the daughter of a Gamekeeper and was one of ten children.[2] She was the Stillroom maid at Calke in 1851.[3] She appears on that year’s Census, but this would not have been her first position, firstly because of her age (20) and secondly because you needed experience to work in the Stillroom. The usual route would be Scullery Maid, Kitchenmaid and then Stillroom Maid. The room which Abra would have spent most of her time at Calke is currently the small apartment kitchen, which was converted from the Stillroom by Hilda in 1925. Although it has been fitted with new cupboards and appliances there is a ‘left-over’ from its time as the Stillroom. In the far corner mounted on the wall is a very large ‘grinder’. No one is sure what it was for, but it was possibly for grinding coffee beans.

We have a letter of recommendation from the Housekeeper at Normanby Hall in Lincolnshire, where Abra’s father John, worked as Gamekeeper and she recommends getting a character reference from Mrs Winn at Nostell Priory near Pontefract, where Abra had worked previously. The character reference states that she is ‘a very respectable, steady and honest servant’, however she left because of a severely strained hand. Mrs Winn suggests Lady Crewe ‘ ascertains how far she has recovered before engaging her.’[4]

We don’t know how long Abra stayed, but in 1871 she appears in Tunbridge Wells as Abra Ford, married and a lodging house keeper.[5] This was a very common career for ex female servants. Her address was Ashton Lodge, which today is a very substantial property. She had obviously done very well for herself. She died in July 1887.

We don’t know how adventurous they were at Calke, but records from other houses suggest some products of the Stillroom could be Cherries in Brandy, Strawberries in Madeira, dried Apricots, and pickling anything from onions to cabbage. Spicey chutney’s influenced by contact with the Indian sub-continent and Piccallili. In those days there was also the need to pickle eggs, as hens naturally go ‘off lay’ during winter.[6]

We have an interesting couple of letters in the Calke Archive which show how the Stillroom Maid’s job had developed.

Hannah Pett came to Calke as Stillroom maid in 1865 after a spell working in the same position for Lord Belper in Derby.[7] Hannah’s letter sets out her skills and is interesting because she has written it herself. Very often, servants who were not very literate would get another person to write it for them. A portion of the letter is below, written and spelt as Hannah wrote it. I applaud her effort.

Again, I’m not sure how long she stayed but by 1871 she was working at Margham Park, Glamorgan[9] and by 1881 she had made the career jump to Housekeeper (I hope her spelling had improved) working at the brand new Adderley Hall, Shropshire.[10] She was in charge of a large household of 16 servants and possibly working with the latest technology of the time.

Next article: The Housemaid