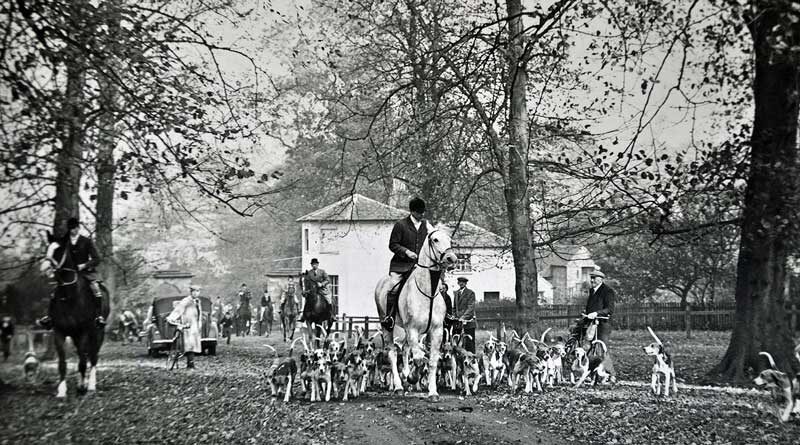 Hunting, of course, has been going on since man first walked the earth. It was done by humans for meat, recreation, and to remove predators. There are many accounts of Henry VIII going hunting, usually for deer in the Royal Parks. The aristocracy followed royal fashion and created their own deer parks on their estates and Calke was no exception.

Hunting developed into fox hunting when the deer population declined. This occurred when the open fields and common land where many deer chose to breed were enclosed at the beginning of the 19th Century. Hunting with hounds then became the thing. However, up until Victorian times the hunts tended to be private affairs run from estates like Calke.[1]

The Master of the Hunt would be the head of the household and at the beginning of the 19th century, this was Sir Henry 7th Baronet. We know he hunted from several references from the Rev. Bagshaw Stevens who talks of ‘meeting him in the field’ and that ‘Sir Henry had been out with his new fox hounds which he bought from Lord Moira for 500 guineas,’ demonstrating that he took the pastime very seriously. That was a huge sum in those days. But a letter to Nanny (Henry’s wife) from her mother in law, Lady Greville, perhaps hints that Henry didn’t always find it an easy thing. She writes that she hopes he ‘would not fatigue himself by hunting as it always deranges his stomach.’[2]

There was also an advertisement in the Derby Mercury in 1801 for the sale of a house in Kegworth which says ‘in a fine sporting country and in the immediate neighbourhood of the Quarndon and Calke Hunts.’[3]

Participants in the hunt would be friends and acquaintances of neighbouring farms and estates, or in the case of Sir Henry, with his ‘parsonic tribe’ which meant the clergymen who held livings that were the gift of the Harpurs.[4]

The Master of the Hunt needed a Huntsman to take care of and train his hounds and organise the hunt. Sir Henry’s Huntsman was William Stansby.

William Stansby was born in Morley, Derbyshire in 1765 to Thomas and Ann. As was increasingly common in those days, Thomas and Ann had married only 4 months before on 4 December 1764.[5] They were mainly a farming family; William’s career path kept him working in the countryside, but more on the Equine side. We find him in Greasley, Notts where he married Susannah Rippon in 1800. Their first 4 children were born there too.

I have a sneaking suspicion that he was working at nearby Watnall Hall for Launcelot Rolleston, who was a keen Huntsman and hunted with the Markeaton Hunt. Launcelot died in 1802 and William first appeared in the  Calke Steward’s Account books in 1807, but it’s possible he was here before then.[6] We are fortunate to have an early likeness of William in a painting residing in the Library with William standing with ‘Sheepface’ one of Sir Henry’s hunters.

He was given 25 weeks Board wages (£13.12s) in 1807 and then appeared in the 1811-1814 servant lists as Huntsman and Groom. These lists were part of a tax document as tax had to be paid on every male servant you had.[7] His last 5 children were baptised at St Giles Church Calke and he gave their address as Derby Hills. Given his job title, I think it is a fair conjecture that they lived at Kennel Cottages, named because that’s where the kennels for the hunting dogs were. He was still at Calke in 1818 when his son William came to work with him as 2nd Whipper-in.[8] He would have been a professional Huntsman with a great deal of experience. It tended to be a long apprenticeship. His reputation depended on a successful Hunt and he would spend a lot of time preparing the dogs for this. On the day of the hunt, he would take the hounds, along with his 1st and 2nd Whipper into the starting point, to await the Hunters. His son, William’s job was to keep the Hounds on track, following the scent, to whip them into line. (Think of the Party Whips in Parliament today). We have examples of travelling expenses for William in the Calke Archive. The snippet below is from 1807 showing among other things payment for finding a lost Hound puppy between Oldershaw’s and Donington.

At some time after this, he left, but not far. He became a farmer in Smisby. He died there in 1836.[9] His wife Susannah, moved to Derby where she died in 1849 but is buried with her husband in Smisby.[10]

We learn a lot about William, the son’s story from an obituary in the Sporting Gazette in 1880. After Calke he went on to become a well known and highly respected huntsman. In 1825 William was second whip to Lord Petre at Thorndon Hall in Essex and remained there for 6 years until Lord Petre died in 1831. He was then engaged as second whip to The Hampshire Hounds and then a season each with the Puckeridge Hounds in Hertfordshire and the Worcester Hounds.

In 1835 he made the climb to first whip for the Duke of Beaufort based at Badminton. This was a very prestigious position at the largest Hunt in the country and he must have been one of the best at his job to acquire a place there.  It is there that he met his future wife, Sarah Briggs, who is a servant at Badminton House. They married in 1848 in Nettleton Wiltshire, where her parents live. Interestingly, her father Thomas was born in Ticknall and was, at the time of the marriage, a Stud Groom and in 1851, a Retired Gentleman’s Coachman.

William moved around quite a bit, and he would probably have heard about a position at a particular hunt by word of mouth. The Master’s of the various hunts would also know each other fairly well and could recommend good men for positions too.

William achieved Huntsman with the Worcestershire Hounds not long after his marriage. He retired about 8 years later and lived in Speen Berkshire.

We think William may have been the last Huntsman employed by the Harpur Crewe’s as Sir George 8th Bart didn’t like hunting and Sir John 9th Bart was much more interested in breeding and showing sheep and cattle.

Hunts moved from the aristocratic estates to county hunts but Calke still allowed hunting on its land by the Quorn and the Meynell and South Staffordshire hunts. The featured image, a photograph of unknown date (probably 1940/50s) shows the Hunt coming up the drive from Ticknall. This continued right up to 2004 when hunting with dogs was banned. Trail hunting (without dogs) takes place occasionally.