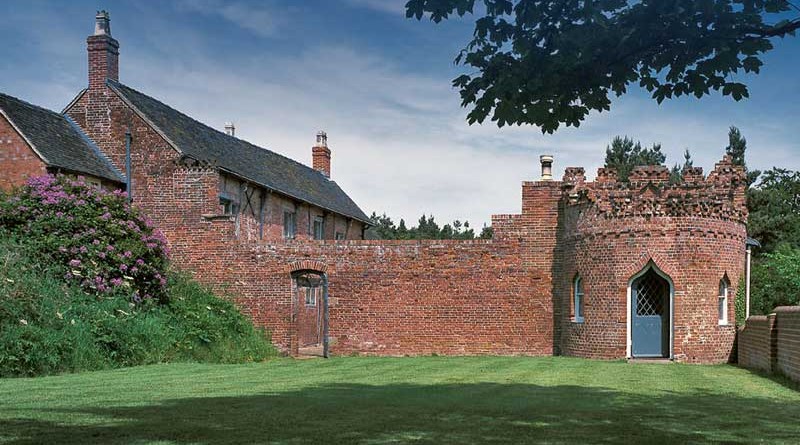 Like many properties rescued by the Landmark Trust, Knowle Hill is a fragment, an intriguing memory of something once larger and ﬁner. The fragment here is not just of a building, but also of a most interesting garden.

Historical and archaeological research shows that in the two converging valleys which make up Knowle Hill we have the remains of a garden created around 1700, which has undergone little structural alteration since 1770.

In 1686, Walter Burdett. a younger son of the neighbouring estate of Foremark, rented 45 acres of land called Knowle Hills from the Cokes of Melbourne. Burdett was a barrister practising in London who retired to the country after his father’s death in 1696. ln 1701, he moved into a new house he had built for himself at Knowle Hill, on the western side of a little valley. Round his house, Walter formed a garden. Its character was Italian, an unusual choice for that period. The natural landscape was allowed to blend evocatively with the more formal layout of terraces and pools, to conjure up an Elysian world in miniature.

On his death in 1732, Walter Burdett left Knowle Hill to his niece, Jane Hopegood, who soon sold it to a young man named Nicholas Hardinge. ln 1766, Knowle Hill was bought by Walter’s great-nephew, Sir Robert Burdett of Foremark who demolished the house. ln its place, possibly over some former stables, he built a custodian’s cottage and a Gothick summerhouse that soared like a ruined castle on the valley’s edge. Both these survive. Walter’s house was left as an intriguing classical ruin. Knowle Hill was now a pleasure garden, to be visited for picnics and other light-hearted excursions. In the 19th century, it became a popular resort for people from nearby towns.

When Knowle Hill was first suggested to the Landmark Trust in 1987, a garden landscape was barely still discernible. The two wooded valleys had been leased to the Forestry Commission about 1950. The surrounding land was later sold to a neighbouring farmer, along with two pools in the valleys. The buildings, hardly lived in since 1958, were sold in 1982 to a private owner but remained for the most part empty, growing ever more ruinous. Alerted by local conservationists, Landmark began negotiations to reunite the property with its landscape, bit by bit. The first holidaymakers arrived to stay in Easter 1994.

The buildings and their repair.

The brick buildings around the walled courtyard were mainly built by Sir Robert Burdett in 1769, but contain fragments of Walter Burdett’s earlier buildings. The lower range on the east has been much reduced in size, firstly around 1900 and again in 1992-4, by Landmark. The two-storeyed west range may have started as a single storey building, open-fronted, perhaps a stable of about 1700. The spaces between the timber posts were filled in with brick when the cottage was added above in 1769.

Some hard decisions had to be taken since the cost of repairing everything would have been huge. Farm buildings on the north side of the courtyard were no longer needed so these were cleared, leaving just one gable. The northern rooms of the summerhouse were even sadder to part with.

Water and electricity had to be brought in, and kitchen and bathroom provided. The repairs were carried out in as careful and conservative a way as possible, to preserve the character of the rooms, with their small fireplaces and casement windows.

On the east is what remains of Sir Robert’s summerhouse. Until about 1900, when it was re-roofed, this range was much taller, rising in the centre to a tower. The parapet and part of the tower was reinstated in 1994 using an early photograph.

Inside the summerhouse, stone steps lead down to two rooms on a terrace cut out of the side of the hill. Their outer walls are stone and they are lit by windows which have been altered to give them Gothick heads. North of these rooms is an open terrace, with shallow niches in its inner retaining wall.

This terrace belongs to the 1700 garden layout. The rooms at its end may be the remains of a gazebo inside which a flight of steps led up to the main terrace. The main room of the summerhouse is the garden room, now the sitting room for the Landmark, called Pemik’s Room after the benefactor who enabled its repair. Although derelict, enough detail survived of joinery and plasterwork to allow the new work to be copied from it. The window in the outer wall is new.

The repair of the garden and its surviving structures remains an ongoing project when funds permit.