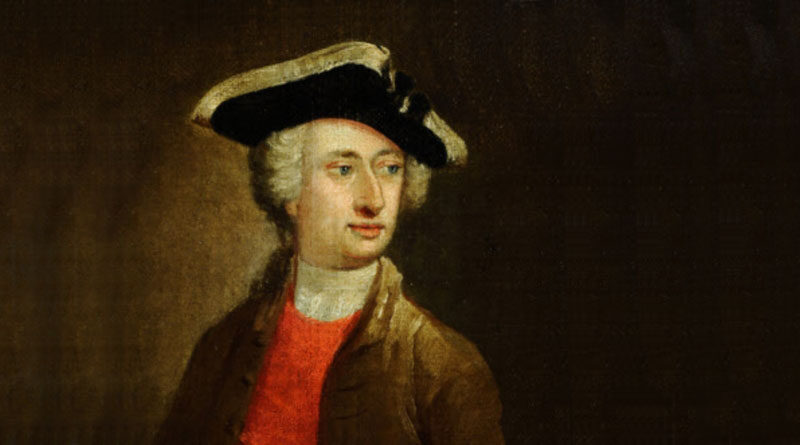 Born on the 6th. July 1739 – had he been born 50 years later, I think that he would have figured in one of Georgette Heyer’s novels – little is known of the 6th Baronet’s education. He went to Westminster until he was ten but, then, although we know that he went on ‘The tour’ for about three-and-a-half years before he was 21, there seems to be little record of the intervening time.

Above the fireplace in the Saloon, in Calke Abbey, hangs the large portrait of Lady Frances Greville, daughter of the Earl of Warwick, with the infant Henry, the future 7th. Baronet, holding his toy, a ‘bandalore’, or, what we would call today, ‘yo yo’. Marrying in 1762, they had only the one son although, as Sue Styche, another of our volunteer researchers, points out, in correspondence with a friend, Lady Frances says that she would have liked more children, especially a daughter. (her brother, Sir Charles, and her uncle, Sir William Hamilton were, of course, associated with the ‘romantic’ figure, Emma Hart)

In 1761 he entered Parliament, unopposed, for Derby. He appears to have been classed as a Tory although there is no record of him speaking in the House of his voting record. He, probably, stayed in 36, Upper Grosvenor Street whilst in London – it was about a four-day journey from Calke to London in those days. In 1773, he bought Tadworth Court, in Surrey, which the family sold in 1806. (It, later, became a country part of Great Ormond Street Hospital and is now run by The Children’s Trust)

At home he effected a number of changes. Together with other landowners he took advantage of the Enclosure Act to seal off the limeyards, which gave him the right to manage the extraction and associated kilns.

In the immediate vicinity of the house, he employed Eames to eradicate the old formal garden and to create the, then fashionable, informal, landscaped surroundings. He introduced ‘the wilderness’ and the walled kitchen garden and, in the stable block, added the Riding School, employing the distinguished Derby, architect, Joseph Pickford, for the work. He, also, constructed a ‘ride’ at Swarkestone, to further his **racing activities.

In these he was very active and had some success. He won three Doncaster Cups, the Chester Cup, Lichfield Cup, and several other top races.

We always, romantically, link him to the survival of the racehorse *‘Squirt’, when he was only 11 years old but we must accept that it could have been the Agent, or Steward or his Guardian.

With all this, you would not have thought that he had room for extra-marital relations but, no! He had several, all neatly documented in the records together with the record of any illegitimate children – all of which were generously cared for. Quite a man – Georgette would have loved him as a character!

*Squirt was bred by William Metcalfe, of Beverley. His sire was Bartletts Chiders, who was a son of the Darley Arabian and whose dam, Betty Leeds, could trace her ancestry back to Darcy’s Yellow Turk.  He was owned, firstly, by Lord Portmore but came into the Harpur stable around 1742. His racing record was mediocre and he was put to stud.

His failure on the race track may have been due to the onset of laminitis because, in 1750, the decision was taken to put him down since this affliction was incurable. However, as he was being let to the kennels by Miles Micklethwaite, the veterinary surgeon, his groom pleaded for him on the ground that, although he could hardly stand, he could still stand at stud – if you follow what I mean.

His plea succeeded and, although Squirt died soon after, in the interim period he sired several horses, including Marske, who went on to sire Eclipse  possibly the best racehorse of all time. He ran in eighteen races, winning sixteen of them and his stud line has produced over 95% of present-day Group 1 winners.

So, the next time you put a wager on the Derby, think of the little drama played out in the stables at Calke Abbey in 1750, that set the pattern for the future of British Flat Racing – a lame horse, a compassionate groom and, possibly, the sixth baronet, who was eleven years old at the time.

**Horse racing, probably, started when two people thought that they had a horse that could beat the next chaps. Indeed, by the start of the 18thC, most races were just that. The number of horses was small and the purse w s the total that each owner had subscribed, in other words, ‘staked’.

The events were ‘stamina’ races, as the horses were of the stamp of heavy hunters. Towards the end of the 17thC, Charles II had brought over 43 brood mares from France, and the Arabian blood was beginning to come by the turn of the century, but, at the time of the 6th. Baronet, horse racing was very different to that we know to-day.

The sprint horse – 5 furlongs up to a mile-and-a-half, was unknown. Races were, generally, of four-mile heats, followed by 30 minutes ‘currying’ time, then another four miles. If there was a clear decision, it stopped there. If there was not, then a third four-mile heat was run. With one Calke horse, Furiband, there is a record of a four-heat race.

Until 1836, when Lord Bentinck introduced the ‘Horse Box’, a racehorse had to be walked or ridden to the course from its home stable. Thus, racing was, geographically, localised, but, in 1836 Bentinck had a horse at Goodwood that was due to run in the St. Leger, at Doncaster, three days later. Thinking that the horse would 1) not stand a chance of getting there in time, or 2) that it would be so fatigued that it would not be able to run, many wagers were made against it. However, Bentinck’s horse box, drawn by six horses, with frequent changes, got there with a fresh horse, won, and took home prize money and wagers totalling around £1,500,000 in to-day’s money!