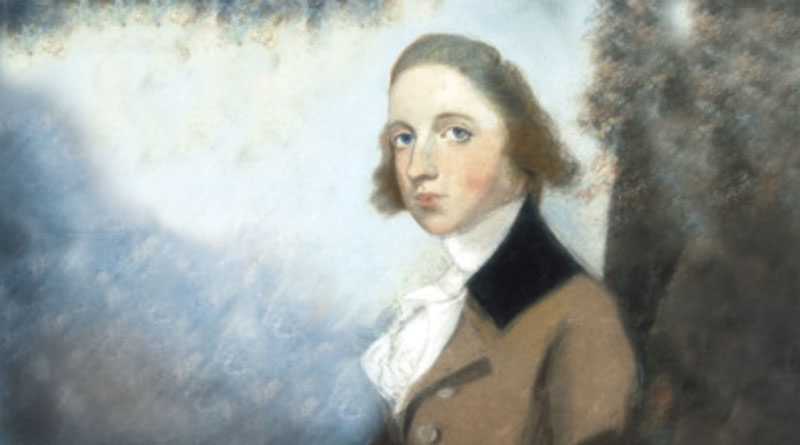 In his private diaries, the then Headmaster of Repton School, The Rev. William Bagshaw Stevens, called Sir Henry Harpur, the 7th. Baronet, the ‘Isolated Baronet’. (Not wisely, perhaps, since Sir Henry was a Governor of the school as the Harpurs had been since the school was founded by Sir John Port’s legacy of 1557). Research has since shown that this was not true but the name stuck.

Born in London in 1763, the only legitimate child of his father, he appears to have had a lonely and isolated childhood. Educated by tutors before going to Christ Church, Oxford and then going on a ‘grand tour’ with his tutor, he also spent some time in Naples, where his great-uncle was ambassador.

From the clothes that are still in Calke Abbey, Sir Henry appears to have been a small, slightly built, man and this, coupled with his intense, and seemingly incurable, shyness, gave him an unapproachable character. He would write letters to the servants and, curiously, to his children, rather than talk to them face-to-face.

He married Nanny Hawkins* in 1792 and they came to Calke.

In 1805, he turned his attention to the exterior, dismantled the Gibbs stairs and replaced them with the Portico. Makes it sound easy, doesn’t it!  He also created the grotto to the east of the house (well, they were in fashion) and continued the development of the gardens. On the farming side, he created a ‘state of the art’ dairy on the site of what is now Home Farm, producing cheese as well as milk.

The lime-yards were becoming very busy. To avoid the bad roads and tolls which were being charged on the road from Ashby Wolds to Calke, the tramway was built.

In 1794 Sir Henry was serving his term as High Sheriff when the Government, who feared an attempted invasion by France, instructed all High Sheriffs to raise companies of yeoman cavalry as a ‘Home Guard’. Derbyshire was no exception and the leading landowners in the county duly created their own troops to form such a force. Sir Henry formed a Calke Troop but I will cover that in a separate article.

Correspondence shows that he was in contact with many of the notable people of his time, including, although he was not one of the company (membership was restricted to 14), members of the Lunar Society; one leading member was Erasmus Darwin, Charles Darwin’s grandfather, who lived, and is buried, in Breadsall, then a Harpur estate. Many of the books in the Library at Calke reflect these interests.

To sum it up, I feel that Sir Henry was one of a kind; capable of affection but self-opinionated. Able to converse fluently in print yet reticent to make personal friendships – a character quite unique and forward-looking, who was responsible for so many of the changes that made Calke Abbey, the Park and the estate what we know today. And he left this world in his own, unique, way.

He was driving his carriage to the house, in Elstree, in which he was staying whilst in London, one Saturday evening, when the horses become restive and one of the wheels hit a gatepost, throwing Sir Henry forcibly out of the carriage. He landed on his head, dying instantly.

*Sue Styche’s research shows that Nanny Hawkins was born in the small village of Duddleswell, Nr. East Grinstead, Sussex, and christened there in October 1767. In his will, her father, Charles Hawkins, describes himself as a ‘gentleman’ and he and his wife, Ann, lie under a chest tomb in the churchyard of St Swithin’s Church, East Grinstead.

Nanny must have been educated to some extent since it is known that she had correspondence with Sir Henry before they were married. It is also likely that, if she were a lady’s maid, given the manners of the time, she and Sir Henry would not have met. It is more likely that she was acting as a ‘lady’s companion’. We do not know for whom but, at the time, Lady Elizabeth Compton and her husband, George Cavendish, were living in Eastbourne and it is likely that Sir Henry was a visitor.

Although he had installed Nanny in a house on the Calke estate – not visible from the mansion – Henry was strongly advised against marriage by his mother and his steward and, in fact, it seems that he was not keen on the idea, himself. However, on the 4th February 1792, they were married by special licence. This allayed any fears that Nanny may have had about her situation.

Having made over their house in London to his mother for life, Henry bought a house in Margate, at that time a small fishing village of under 5,000 people.

It seems to have been an amicable marriage – with the usual number of tiffs! Always made up.

After Henry’s sudden death, his son, George, built a house in Calke Park for his mother. She, however, declined to live there and rented a number of places. For a while, she lived at Penge Place, near to her mother-in-law in Beckenham and, for a while, a house near her daughter, Selina, in Buckinghamshire.

Nanny died in East Molesey, Surrey, on the 20th March 1827. Sir George arranged for her body to be brought back to Calke Abbey to be interred in the family vault in St. Giles’ Church

**Two words that we accept without question. The word ‘Butler’ comes from the French word ‘Boutilier’. In the days of which we speak, wine came to the estates in barrels and was decanted into bottles on site. It was the Boutilier’s job to oversee this and to be the estate’s expert on wine. It changed, over time, to Butler. The same could be said of the word ‘Pantry’ which stems from the French word for bread, ‘Pain’ and which came to embrace the comestibles.

The Butler’s Pantry was where the two came together to go into the Dining Room.

Nanny Hawkin’s Hatchment (St. Giles Church) is also interesting. She was, almost certainly, not of an armigerous family, yet displayed a coat of arms. Records show that this was granted in 1792, the year of their marriage but it bears a remarkable resemblance to that of Sir John Hawkins a prominent figure in the late 17th Century. The reference to his maritime exploits was represented by the ‘waves’ at the bottom of his coat-of-arms, missing on Nanny’s version.

Did Sir Henry simply approach the College of Heralds, slip them a few pennies and say ‘Find me a coat of arms for Hawkins’ or is there an ancient link: if so, I can’t find it.

And, perhaps, we should let it lie since Sir John Hawkins made his vast fortune from slave trading.