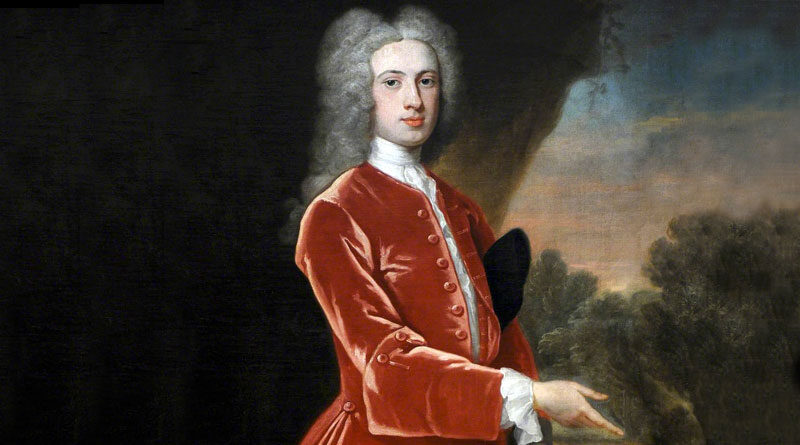 Sir Henry Harpur, 5th baronet was born in 1708 and educated at Brasenose College, Oxford. He then went, as was the custom, – if you could afford it – on the foreign tour. He seems to have spent most of that time in France, where he acquired good manners and learned horsemanship.

He was 26 years old when he married Caroline, daughter of John Manners, 2nd. Duke of Rutland with whom he had four children: John (died young), Caroline Lucy*, Henry (Harry), who succeeded him and (Major) Charles, who died at 29 years old and is buried at Calke.

Between the date of their marriage and his inheriting the title in 1741, they lived at Bloxham, Lincs., in a house belonging to the Duke of Rutland.

He seems to have led the life of a country gentleman while fulfilling his duties as “a member of the landed gentry”. He stood, unsuccessfully, for Parliament for Derbyshire in 1734, but it was not until ten years later that he was returned as a Member of Parliament for Worcester, serving as a member for the opposition. He was serving as a member for Tamworth up to the date of his death. Like his father, he bought a house in London, this time on land that had just been released for building on the estate of the Duke of Westminster, 35, Upper Grosvenor Street. This house was, eventually, sold to George Villiers who, deeming it too small, bought No. 34 and, then, No. 36!

There is one other item of general interest; it was the 5th Baronet who brought Squirt to Calke in 1742.

Adam Hay* was a trier! He tried this and he tried that, pretty consistently without much success. He was the brother of Sir James Hay. He was apprenticed to a firm of Edinburgh merchants but abandoned a commercial career, obtaining a commission in the army.

He was returned to Parliament in 1767, it seems, as a stopgap, since the seat was relinquished the following year.  Then he tried his hand at land proprietorship but got into financial difficulties.

He married twice, the second time to Caroline Lucy, daughter of the 5th. Baronet.

He died, ‘suddenly’ in 1775. Although there was talk of suicide, he had been in poor health for some time and I believe, from the evidence I have seen, that his death was caused by cancer, finally bowel cancer.

Archibald Baillie-Coutts Stewart** entered the Horse Guards (the Blues) as a cornet, the lowest commissioned rank, was promoted to Lieutenant, bought a captaincy and retired from the army as a major. It would be nice to write of battles fought and charges led, but, just before he joined, the regiment had returned to England and, shall we say, it had been ‘stood down’. A troop had been reduced from 52 to 29. Consequently, all his army career was spent in the East Midlands, around Derby and Nottingham. He and Caroline might well have met at an assembly or similar function.

As his name suggests, he was related to Coutts, the bankers.

It is through Caroline Lucy, Sir Henry’s daughter, that the modern association with the Jenney family and the estate of Drayton Beauchamp commenced.

The Drayton Beauchamp estate had been held by the Cheyne family since the 14th C but, on the death of William Cheyne, Viscount Newhaven, in 1732, it was sold to the Gurley family, who came from Isleworth, for £22,200 (just over £4 Million to-day). William Gunley’s widow, Martha, built Turret House.

On the death of Mrs Gunley, the estate passed to Mary Digges, who married General Lord Robert Manners, son of the 2nd. Duke of Rutland and, therefore, brother to Caroline Manners, who married Sir Henry, the 5th. Baronet.

But, back to Lady Mary: On her death, the estate passed to her daughter and on her death, she bequeathed the Drayton Beauchamp estate to Caroline Lucy’s daughter Caroline Frances (who, by then had married), it automatically passed to the Jenney family and was the major seat from then on. The Lordship was only relinquished by the death of Miss Airmyne Harpur-Crewe (née Jenney). (They had previously been seated at Ditchingham Lodge, leased from a Mr H. R. Hagard.