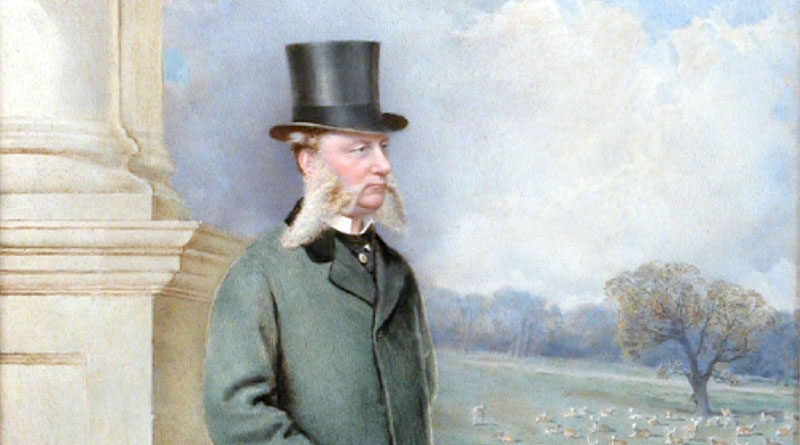 Sir John Harpur-Crewe, 9th baronet of Calke Abbey. From an image in the NT Collection.
Baronets
Norman Monahan 25 January 202217 May 2022

‘Farmer John’ was, I think, the affectionate epithet applied to Sir Jon Harpur Crewe, the 9th. Baronet of Calke Abbey. Nothing signified it more, perhaps, than his speech at his son’s wedding, where he said, in effect, ‘enjoy yourselves but, if you get fed up, come and look at my longhorn cattle – that’s where I’ll be’

He was born on the 18th November 1824. His father, Sir George, as we know, lamented that he was unable, because of his other duties, to give his son the educational tutoring that he would have wished. He had, therefore, engaged the Rev’d. Andrew Bloxam (note correct spelling), The Vicar of Glenfield, to come to Calke for that purpose. Bloxam was living at Calke for three years until John, at the age of 13, went to Rugby, in August 1838. From there he went on to Exeter College, Oxford, where he matriculated. It seems, however, that he was not happy at Oxford, so his mother arranged a move to Trinity College, Cambridge, where he obtained his Master’s degree.

He inherited the title when he was only twenty years of age. Like his father he was extremely interested in the estate but, in contrast, had no desire for public office. True, he served a term as High Sheriff of Derbyshire in 1853 and was a Governor of Repton School (as were all the Harpurs and Harpur Crewes, back to Richard Harpur of Swarkestone, who helped found Repton School). These were all that you might call ‘mandatory’ duties but, where he had the choice, he avoided others, as when he was asked to become, as his father had been, a Trustee of Rugby School, he declined.

Sir John married his first cousin, Georgiana, daughter of Sir George’s sister, Selina, who had married William Stanhope Lovell. William had been born with the surname of Badcock but, in 1840 he, and his brother, changed their surname to Badcock-Lovell and, eventually, to Lovell. The descent is reflected in Sir John’s hatchment in St. Giles’ church. They had three children, Vauncey, Alice and Hugo.

But his true love was in the estate and his Longhorn cattle and Portland sheep. He was greatly influenced by the work of Robert Bakewell, of Loughborough who had blazed the trail in changing sheep and cattle from their previous roles as, respectively, wool and draught animals, to meat production. He won many prizes with the Longhorns at various important shows, but his son was not interested in the cattle and, when Sir John died in March 1886, by May of that year,  the cattle were sold. The Portland sheep were retained and are still kept at Calke Abbey. Sir John also had just under 500 sheep and a large flock was still at Calke until just a few years ago. (Sheep and longhorn cattle seen in the Park today belong to Standley’s Barn Farm).

Although we think of Sir Vauncey as the obsessive collector (which he was) it was Sir John who started to build up the display we see today. He commissioned the Ticknall cabinet maker Thomas Marriott to make the display tables that flank the Billiard Table in the Saloon and, also, had a number of the large cases prepared. This is evident from the photographs, taken in 1886, that show them in place.

Sir John died on the 1st March 1896 and was buried in the family vault in St. Giles’ Church, on the estate on March 6th of that year. It is perhaps a sign of the respect in which he was held, to look at the list of pallbearers. They were the Earl of Loudon, Lord Ferrers, The Hon. G. N. Curzon (latter Viceroy of India), Mr Walters Evans (of Darley Abbey and Allestree), The Hon. P. Hastings, Mr F. N. Mundy and the Hon Arden Adderley (Probably Henry Arden, Lady Harpur Crewe’s brother and, later, the 5th Baron Norton)’.

After Sir John’s death, his widow vacated Calke Abbey in favour of Sir Vauncey. She lived, with Alice and Hugo, in rented houses until, in Hugo’s name, a house was bought in the New Forest, where they lived until Hugo’s death in 1905, when the remaining two moved to Alverstoke, in Hampshire. Lady Harpur Crewe died at Calke Abbey in 1910 and Alice, in Bournemouth, in 1920.