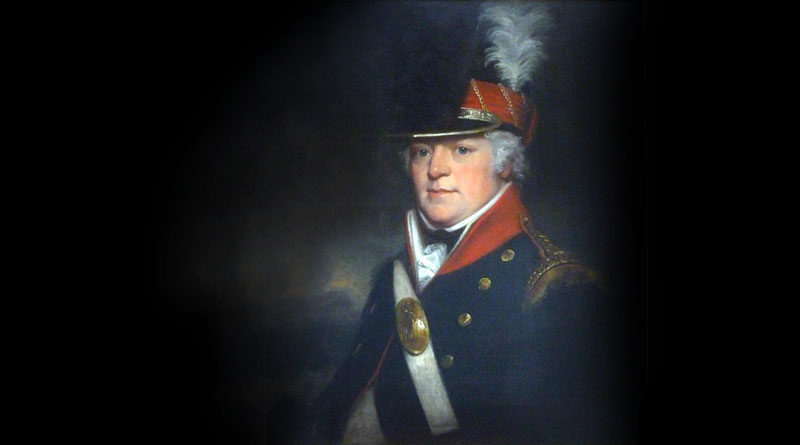 The civil war was raging in France in the last decade of the 18th Century and the British Government feared invasion. In 1794, Pitt brought in his first bill for measures to counter this possibility and, accordingly, a letter was sent to each county’s magistrates, asking them to raise a force of ‘volunteers’ – a ‘fencible (not to be sent abroad) corps or, if you like, ‘a home guard’.

In Derbyshire, a General Session of the Peace was called in Derby on the 29th of April, 1794, which called upon the High Sheriff of the County to ‘call a General Meeting for taking the said papers or plans into consideration’. This, the High Sheriff, one Sir Henry Harpur, of Calke House, as it was then, did, and, after several meetings, on the 21st July 1794, the Calke Troop of the Derbyshire Volunteer Cavalry* came into being.

The first item of importance, that of uniform, was soon settled, and, on the 5th August, it was resolved that £10 be paid to each volunteer to purchase a horse ‘which must be under 14 hands tall and must not be a grey, as shall be approved by the Commanding Officer (was this, again, Sir Henry’s wish to be different and consciousness of his stature)

On the 22nd of October, The London Gazette posted a list of appointments of the officers of the Corps, in which Sir Henry was listed as ‘Lieutenant’ with other prominent Derbyshire gentlemen taking other positions and, by November, one of the Troops had prepared itself for inspection and parades, especially on October, 1795, when the Countess of Hartington presented standards, one of which she had worked herself! Sounds frightfully British, doesn’t it.

The Corps was divided, at its peak, into six Troops: – The Calke Troop, The Derby Troop, The Locko Troop and the Radbourne Troop. In the north and west were the Chesterfield Troop and the Ashbourne Troop. So far as Sir Henry was concerned, he rose from Lieutenant to command the Derby, Radbourne and Locko Toops with the rank of Lieut.-Colonel and, finally, the whole Corps, from which level he was able to enforce the rules regarding the size of mount etc. His son, George, in his turn, was involved with the Yeomanry Cavalry but, as can be seen in his journals, he was not happy about it.  That may have been because, in all its time, apart from parades and inspections, the only occasions on which it was called out seemed to be to put down riots – The Luddite Riots (1811-16), the Brandreth Riots (1817), and, in 1826, the Cavalry marched to Glossop to prevent rioters from entering the county from Lancashire. One wonders what the effect on the locals was as they marched through.

The Corps was, finally, disbanded in 1827 only to be raised again to put down disorders then gradually slimmed down to the Radbourne Troop before becoming absorbed into the regular forces.

*later to be called The Derbyshire Yeomanry Cavalry.

Sources: A record of the Yeomanry Cavalry of Derbyshire (Charles R. Covile)